A Complicated Kindness by Miriam Toews

Miriam Toews spins a compelling tale in 'A Complicated Kindness', a story about a hilariously sarcastic teenage Mennonite Nomi Nickel who struggles to escape the repressive, Canadian town she has grown up in.

Nomi mulls over the ridiculousness of the ban on dancing and taunts the thirty-foot tall statue of Christ that looms over the water tower. Her mother Trudie and her sister Tash have long since been excommunicated by Nomi’s uncle ‘The Mouth’ and Nomi longs to follow them into America, New York city, specifically. The reason she has not left yet is because of her father Ray. She cannot leave him to live alone; Nomi loves him too much.
Nomi finds ways to express herself and her distinct opinions in the fundamentalist Christian society while at the same time comes to terms with her father’s belief and commitment to the church.
Though Ray has trouble nurturing and loving the wildly rebellious Nomi while staying true to his religion, he commits his final act of love for her at the end of the novel. Ray knows how badly Nomi wants to be free but her also knows that Nomi will never leave him behind. One night he skips town and leaves Nomi with nothing but a note and rights to the house he raised her in. When Ray deserts the town, Nomi is also free to go.
Miriam Toews’ portrayal of Nomi is perhaps the most important factor in the novel. Nomi fluently expresses her stinging opinions on her religion and contemplates her dysfunctional relationship and her fears of birth control. Nomi is like so many other young men and women longing to express themselves but feel that their wings are bound by religion, insecurity or any other inhibiting factor.
'A Complicated Kindness' is indeed complicated; between Nomi’s insistent boyfriend Travis, the Mennonite tyrant ‘The Mouth’ and Nomi’s self-criticizing commentary, there is never a dull moment. 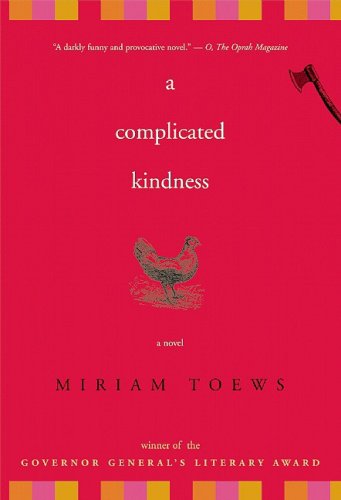