So There by Ben Folds | TeenInk

So There by Ben Folds

Over the years, Ben Folds has been distinguished for his witty lyrics, his stunning honesty, his clever vocals, his genius symphonies. Folds is especially known for his legitimacy; he writes whatever is on his mind, revealing his cards to the world as they are. He is known for being genre-defying: a musician of a very wide, colorful spectrum of the utmost open mindedness. The album So There, released in September 2015, further proves every acclamation about his work. So There effortlessly overlaps refreshing pop and classical arrangements into a critically acclaimed masterpiece.

In an interview published on the Ben Folds’ website, Folds discloses his thoughts about his latest album: "Maybe I should just say 'this is one of the best records I've made' and leave it at that." This is a staggering declaration coming from a man who saw a total of thirteen of his albums reach the Billboard 200 Albums list. Folds, being a fairly humble artist, was clearly ecstatic about his newest release, and for good reason.

So There holds eleven unforgettable tracks within its contents, but a few, in my opinion, are especially worth noting. The album begins with a memorable rhythm and chorus, titled “Capable of Anything.” It is a bittersweet song that skillfully presents an uplifting tune with somewhat veiled condescending lyrics. Leading up to the chorus, Folds writes, “They sing it like a pop song: / ‘You’re capable of anything.’ / And I’m sure they meant / You could be president / Or you could just forgive me. / But I stopped caring what you think about me…” Folds mocks society by quoting the modern cliché that states that we are all “capable of anything;” we just have to set our minds to it. He holds his cynicism throughout the song: “You don’t seem to think that / You could steal, or cheat, or kill, or lie, / But you might.” Despite its discreet patronizing tone, “Capable of Anything” contains one of the happiest sounds on the album, with various flutes and strings to accompany Folds’ vocals. All in all, it is a great morning melody that simply makes you want to sing along.

The following song in So There, “Not a Fan,” is one of my favorites on the album. Folds’ lyrics are conversational, beginning happily and romantically, while gradually winding down into realization and melancholy. The song embarks with Folds relaying that he is open-minded about minor differences in his relationship; he waves them off as things that he could eventually “learn” to get over through compromise. In fact, he writes, “It’s not my cup of tea, / But it’s part of what makes you beautiful to me.” However, as the song progresses, it is clear that Folds can’t take being with his significant other any longer, and clarifies that even a small discrepancy in a relationship could end up being “the very thing that later on will tear it all apart.” Interestingly enough, Folds himself has been married four times; it can be inferred without much doubt that he gathered up past experiences in order to write the lyrics to this song. At any rate, the theme of this tune is very waltz-y; with a rhythm so constant, “Not a Fan” is sure to find itself in a constant, streaming loop in your mind.

The seventh song in So There, “F10-DA,” is a hilarious and clever track with a fairly vulgar theme (repeat the title fast in your head and you’ll know what I’m talking about). The song itself is a verbal pun with incredibly uplifting instrumentals that render constant chuckles throughout its two minute duration. However, despite its charming sound, I recommend you listen to it with headphones on.

“I’m Not the Man” is my personal favorite, eighth on the album. It is the most melancholic song in So There, following the themes of memory, purpose, change, and failing to be who you’re expected. Folds writes, “What will they write about me? / What will the version be when all is said and done? / Will they remember all the places seen, all the poems lost, / Or am I just wondering on?” It is the most relatable song on the album, with the perfect amount of piano flowing throughout it. Folds also mentions the concept of death in this song when he writes, “I’ve buried it all and I’m dancing on my own grave…” Folds has admitted to often contemplating death, and also to the fact that the second movement of his Concerto on the album is, correspondingly, about death as well (according to the Billboard website). This aspect of “I’m Not the Man” adds to its relatability, and therefore enhances its depth. Additionally, Folds ingeniously isolates his voice during this song, generally avoiding detailed instrumentals (excluding the bridge, which portrays the climax of the song and lists bits and pieces of Folds’ memories).  The greatest aspect of “I’m Not the Man” is that it forces you to reflect and differentiate between who you are, who you used to be, and who you want to be.

The last three songs on the album are movements under the Concerto for Piano and Orchestra, conducted by Ben Folds himself. This is where Folds defies genres; this is where it is evident he writes music to write art; this is where it is discovered that he wishes to reveal every detail of music’s magic to his fans. No matter your musical preference, I recommend closing your eyes while listening to these tracks and allowing your mind to drift along the winding path Folds creates through symphony.

There is an overwhelming and undeniable sense of authenticity within So There. Folds lays out his cards for all to see; he is not hiding a thing, and states things as they are. He is not afraid to break genre-barriers. He offers lyrics and music that we can relate to, that we can sympathize to, that we can appreciate. In this way, I think the title of this album fits perfectly with Folds’ obvious goal. I like to imagine that he sees his creations as a card game; he writes confidently, presents his music boldly, and even if multiple people object, he simply places his cards on the table, leans back, and declares, “So There.” 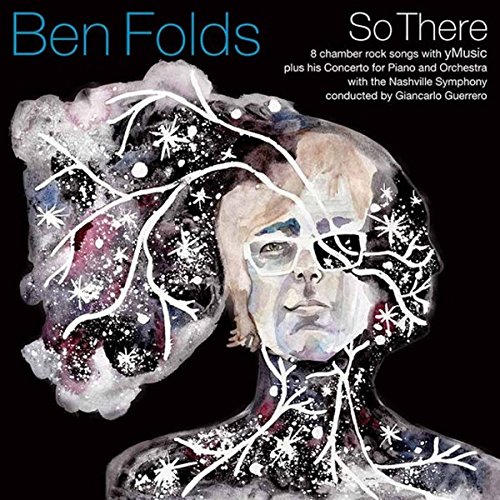