Since the 1980s, U2 have been regarded as one of the world's finest and most unique live bands. With an unmistakable sound that blends soaring melodies and high-tech sound effects with the theatrical energy of lead singer Bono, they have long boasted a larger-than-life worthy of their massive audiences. Although several live recordings and concert films have previously captured the band doing what they do best, none of these has gone as far toward capturing the feeling of being at a U2 concert as the innovative new concert film U2 32.

Filmed at several shows during the Latin American leg of U2's recent Vertigo tour, U2 3D takes advantage of state-of-the-art 3D technology to put the viewer in the center of the shoulder-to-shoulder, manically enthusiastic crowds. The film plays only in specially equipped theaters with 3D capability, including numerous IMAX auditoriums, which provide the most dramatic viewing experience. Special visual effects, which make the band members and their instruments seem to protrude from the screen, are impressively realistic, even if they are occasionally superfluous or used to highlight Bono's regrettable bird imitation.

More important than the 3D visual plane is the exceptional clarity of the audio and video content, which allows the film to approach the live experience as closely as any concert document in the history of the format. Directors Catherine Owens and Mark Pellington also deserve praise for capturing the grandeur of the show from a variety of interesting and well-planned camera angles. U2 is among the very few bands whose live show has expanded beyond the traditional stage, with elevated boardwalks allowing the musicians to literally walk into the sea of adoring fans. This freedom of movement for the band undoubtedly posed an unusual challenge the film crew, one that was gracefully surmounted by expert camera work and production.

As for the performance itself, U2 delivers its stadium-conquering anthems with as much gusto as ever. The band plays as an exceptionally tight unit, exhibiting the kind of natural dynamic that comes with many years of playing with the same group. Indeed, they have not so much aged as they have matured, building confidence in an environment which most younger bands would find intimidating.

The band serves up a selection of its best-loved songs from every phase of its career, ranging from early gems like “New Year's Day” and “Pride (In The Name Of Love)” to new material such as “Love And Peace Or Else” and the hit single “Vertigo,” which thrives in a live setting far more than it did on the recording. The focus is, appropriately, on the band's most rousing stadium anthems, favoring reliable showstoppers such as “Sunday Bloody Sunday” over the more experimental sounds that dominated much of U2's 90s output.

Over the rock-solid core of drummer Larry Mullen Jr. and bassist Adam Clayton, guitarist The Edge once again proves himself worthy of his pseudonym. Known for his distinctive style, which relies heavily on carefully tuned echo and reverb to produce his signature “ringing” tone, The Edge makes good on his stated philosophy that the guitarist should be subservient to the music as a whole, not overly eager to show off his acrobatic finger speed or to dominate the band with shear volume. Perhaps this explains how he has miraculously managed to remain at the cutting “edge” of his art for over two decades.

Bono, as usual, is a powerhouse of impassioned vocals and stage antics. Although his upper vocal range is finally beginning to show minimal wear, Bono is still one of the most engaging and impressive frontmen in rock n' roll. With body language and vocal phrasing that perfectly match the character of each song, Bono exudes emotion and a genuine sense that he cares deeply about his music and about his fans.

Bono also cares deeply about promoting human rights and well-being throughout the world, and has no qualms about using the concert venue as a forum to express these views. Depending on whom you ask, this can either add to or detract from the overall experience of U2's concerts. Bono's political and humanitarian messages play into the band's performance in ways that range from the subtle (Bono dons a headband that reads “Coexist” to promote harmony among people of different faiths) to the imposing (the show stops after the band plays “Miss Sarajevo,” while the Universal Declaration of Human Rights scrolls across the video screens and is read aloud by computerized voices).

While it would be easy to condemn these elements as pretentious and tangential to the purpose of a rock concert, it's better to think of U2's concerts as Bono seems to conceive them: as an experience that centers on music but transcends it, using songs as a vehicle to express a sweeping world view and promote a feeling of mass fraternity. It's no coincidence that a growing number of progressive churches have begun to incorporate U2's songs into their liturgy. In truth, Bono is a sort of non-denominational clergyman who preaches universal love and the dignity of mankind. And, judging by the crowd reactions captured in U2 3D, his band's concerts can approach the level of a religious experience for millions of devout followers.

Ultimately, U2 3D makes the case for Bono as more than a rock star and U2 as more than a band. Perhaps more than any other group in the history of popular music, they have turned their masterful songs and passionate performances into a movement for peaceful revolution in human interaction. It is this spirit that has stayed with U2 for over a quarter century, making them one of the most influential and continually vital bands on the planet. In short, it is only fitting that their new concert film should be so different from all those that came before it in virtually every sense. 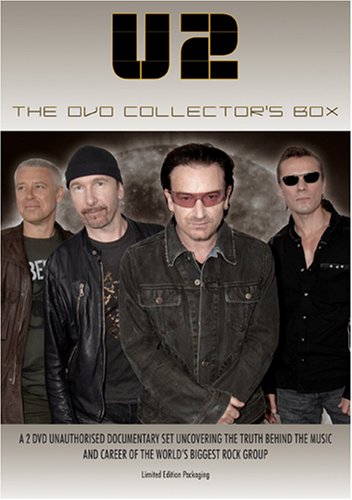