Switched At Birthday by Natalie Standiford

Imagine your usual, popular girl versus the geeky, “uncool” girl. Only make them switch places, and see how that turns out! In the book Switched at Birthday, two very different girls in two different worlds share only one similarity: their birthday. Popular girl Scarlet rules the school and the soccer team with her best friends, while Lavender tries to fit in after the hurtful rumor about her got out. Little did they know that one birthday wish would cause them to wake up in each other’s bodies. Then add friendship drama, the school musical, and upcoming soccer matches. How will the two girls ever get through the week?

What started as a rush to pick out a book before the bell rang turned into a great choice. I picked the closest book as soon as the bell rang. That turned out to be the right decision. I really liked this book. A lot of people think it’s a little cliché to write about switching bodies with someone else, and they’re sort of right. But, nevertheless, this book was an entertaining read.

I love how the author makes most of the school believe they know everything about Scarlet, but they don’t. Even the “perfect” girls in books don’t have absolutely “perfect” lives. I also like how the book was written from two perspectives. Two heads really are better than one!

The only problem with the switching perspectives was that it got a little confusing on who was who. Sometimes they’d refer to “Scarlet”, but it really was Lavender. But that’s alright, because any book on switching places has to be confusing!

I’ve also said this about a lot of other books, but the author knows her characters. No matter what age the author is, the book sounds like it’s really coming from a thirteen-year-old. And that’s a good thing. You don’t want a book set in modern time sounding like a middle-aged adult talking!

Another thing that I didn’t really like was the ending. I don’t want to spoil it or anything, but the ending was a little disjointed. I don’t think it really fit in with the rest of the book.

Overall, I’d recommend this book to anyone who likes hearing both sides of the argument and a quick read. 231 pages, and a 4 out of 5 stars to go with it! 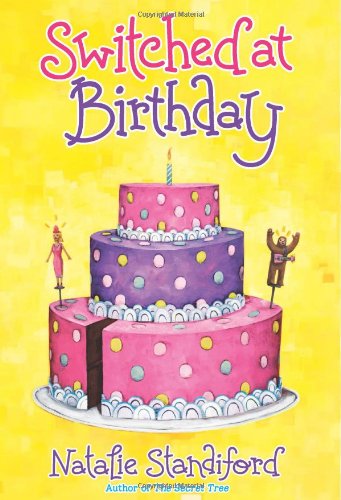