So a trilogy is supposed to mean "a series of three" right?
well why not change the definition to four because thats what Scott Westerfeld did.
Extras is the sequel to Specials. Specials was supposed to be the end of the trilogy but whatever, apparently he likes Japanese people.
This book has basically the same plot line as all his books (not just the trilogy but other books he's written)
1) hero accidentally uncovers a story that they want to tell people but they cant without going back on their word and hurting people.
2) then hero finds out everything they thought they knew was wrong.
3) then it turns out they were right in the first place and it ends with a cliff hanger.

All the books have focused on cutting/anorexia/cliques and how important it is to be yourself, so why change it for this one?
It also once agian focuses on free will and choices that we have that come with the power of freedom. You can really loose yourself if you loose focus of who you really are. You dont have to go as far as making your own clique that never lies just to find yourself though. Freedom comes with responsibility, which we dont seem to have much of anymore. People are going to to what they are going to do.

New problems in this book are:

and a weird obsession to online blogging about random shit and obsessions over celebrities.

In the book the economy collapses after Specials, so they use popularity as currency. Everyone is obsessed with getting their own ratings up. Cliques go crazy, people want to live forever, and they have crazy technology. Woo. Seems good if you really don't think about it.

I don't think that our world is going to get that bad but that is where we might be headed.
Really though, more people read tabloids than read the newspaper.
I bet more people know what's going on with Brittney Spears today than who know that Benazir Bhutto got shot today, or who in the world she is.


(by the way she was the president of Pakistan.)

I don't agree with everything this book says:
I don't think that the world will suddenly become Japanese... that was weird.
I don't think that it will be one single persons fault or triumph for anything happening.
And I do think that sometime we will fire missiles somewhere again, unless what the author predicts happens soon.
Sadly we do need something to happen, something big like in the medieval ages with the plaque,(maybe not that big) something to wake us up from this popularity starving economy.
However if these books are right about one thing it's that once we fix something, something unexpected is right around the corner.
The world will never be boring. 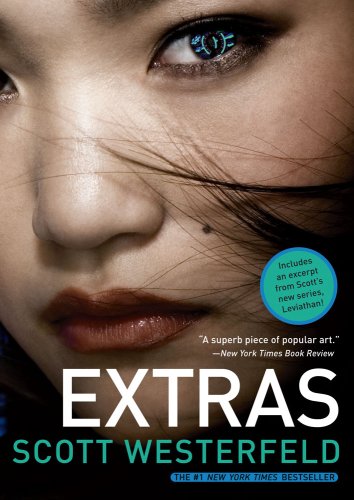 
Buy from Amazon
The author's comments:
I wrote this as a blog after I read the book. The books a pretty good and you should read the first three; they are the best.
Post a comment
Submit your own

View profile
I never thought they were japanese. I just thought it was a story that was in China or Japan. I loved this book, but they kind of made it look like you have to be popular to have any friends.
Erin said...
on Apr. 5 2009 at 8:08 pm
I don't think "the world suddenly became Japanese." The book probably just took place in Asia.