Harry Potter and the Deathly Hallows

The book begins with Voldemort arriving at the Malfoy Mansion and plotting how to kill Harry Potter. The story continues on Harry's final stay with his Aunt Petunia and Uncle Vernon. Harry's aunt, uncle, and cousin, Dudley, are forced into hiding for their own safety. Dudley's goodbye was a touching moment. Then, Harry goes into hiding from Voldemort and is picked up by a bunch of his wizard friends who took polyjuice potion in order to turn into Harry, to confuse Voldemort. Harry attends his friend's, Ron's brother's, wedding, and then Harry, Ron, and Hermione go on an adventure that Dumbledore instructed Harry to do right before Dumbledore died. They need to find Voldemort's horcruxes, which are pieces of his soul.
In order for Harry to kill Voldemort, he has to find all the horcruxes. In order for Harry, Ron, and Hermione to find all the horcruxes they must return to Hogwarts, and they bring a battle along with them. Harry comes face to face with Voldemort, who puts the killing spell on Harry. Harry doesn't really survive but instead he has a dream that Dumbledore is talking to him. Harry finds out that he is a horcrux himself and so when Voldemort put the killing curse on Harry, Voldemort destroyed the horcrux and didn't really kill Harry. Harry wakes up and eventually kills Voldemort.
People really need to read Harry Potter and the Deathly Hallows. If you have read the other Harry Potter books and loved them, then you will definitely love this book. Every moment of the book makes you want to never stop reading. 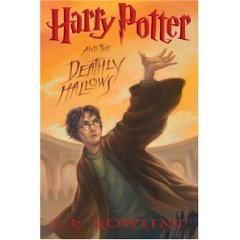