Magic Johnson and Larry Bird: When the Game was ours by Jackie MacMullan | Teen Ink

Magic Johnson and Larry Bird: When the Game was ours by Jackie MacMullan


When the Game was ours takes us into the famous rivalry between the two best basketball players of all time in Larry Bird and Magic Johnson. The book takes us behind the scenes of both players’ progression in the game of basketball. From the end of their high school years to the college games between Indiana State and Michigan State, and ending with their final professional basketball games, they have been in a competition. The readers are sent through numerous conflicts as they achieve their biggest goals, NCAA championships and an NBA title.

Even though Bird and Johnson have been credited the author of this amazing book, we can see that it is MacMullan’s book as we see that most of it is written in third person. The author does an amazing job bringing me into the book by starting with a conflict that Larry Bird had to face at the end of his high school years. As the reader, I have been “stuck” into this book while the author does a fantastic job balancing out the plot. Magic Johnson and Larry Bird are known as two of the most successful basketball players of all time, but When the Game was ours reveals the two stars’ misfortune and major obstacles. Basketball fans, especially Magic and Larry fans, would absolutely enjoy reading this book. All I knew about these two superstars was that they were a great rival, that’s it, but after reading I realized that there were more to these two phenomenons.

There were no major complaints in this book besides the fact that they did not include other teammates’ reactions and observations to their stars. Other than that, this book was phenomenal, and I would recommend this to any person who enjoys reading conflict, someone who loves competition, and someone who is curious about the behind the scenes stories of the great Earvin “Magic” Johnson and the amazing Larry Bird. 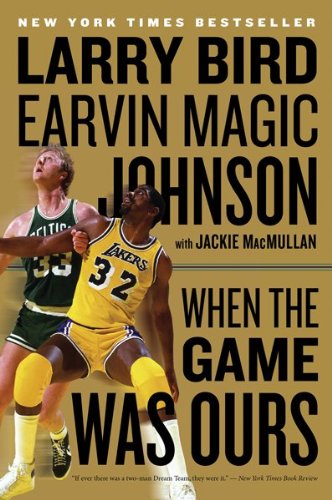 
Buy from Amazon
The author's comments:
First of all, what inspired me to read this book is simply because it was about basketball. I am a big basketball fan, and I wanted to know more about the history between the greatest players in the NBA in Magic Johnson and Larry Bird
Post a comment
Submit your own