The Year of Our War by Steph Swainston | Teen Ink

The Year of Our War by Steph Swainston

Favorite Quote:
~Its not how deep you fish~
~Its the motion of the ocean~

The Year of Our War is an amazing ride that shows you what it would be like to have to fight insects twice your size. You will journey with Jant Shira, the Messenger, and all his adventures.

Our story find itself behind the Wall, a huge wall the insects built to keep the other races from getting in, were the Immortals alongside the Awains are pushing the insects back behind the Wall. Then everything goes wrong when they hit the Wall. The Awain king, Dunlin, decides to push back behind the Wall into the Paperlands in attempts of getting the Emperors blessing to become Immortal, but he is mortally wounded by several insects. Jant recovers Dunlin and transports him to the Shift, another planar world that can be only accessed by massive use of drugs, to save him. The insects, meanwhile the Immortals are trying to decide what to do push back the line.

The realistic characters in Swainston’s novels make other books seem unrealistic. She gives almost every character flaws that hinder their objectives in the novel. Jant has a serious drug issue and has a hard time coping with this. Some people may say that the heroes need to be holy, but I really think it adds more to the novel the more the characters suffer. You then connect with them more.

Swainston’s style is rather weird for a British novelist, because she actually didn’t use British English words. She even kept different dialects of way people speak. She made a whole world that could stand the test of time and three more books.

This book, the Year of Our War, makes me think about my own flaws as a person and how I can overcome them. That is the main theme in the book I believe. I also thought the setting in which the book was taking was quite diverse: mountains, plains, forests, shorelines, islands and even the weird paper houses of the Paperlands. This lets her expand to wherever and whenever (the main character is Immortal) she wants and this adds a whole new depth to the novel.

All in all this book hits home with its realistic characters, but at the same time drives a really strong fantasy train that refuses to be derailed. Swainston’s ability to keep dialects the same between several different species of life, gives the feel of a whole new world. The Year of Our War was an amazing book and I will definitely read its sequel No Present Like Time. 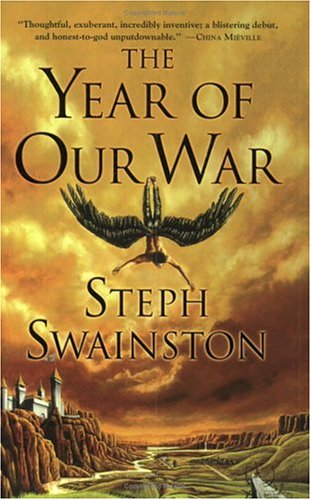