“The morning after noted child prodigy Colin Singleton graduated from high school and got dumped for the nineteenth time by a girl named Katherine, he took a bath.” And so begins award-winning author John Green’s novel, An Abundance of Katherines. The book is filled with mathematical formulas, scientific terms, and historical references, but don’t let that steer you away from it at all; it’s much more than that, with characters you can feel emotions for and scenes that make you laugh. It doesn’t take a child prodigy to figure it out: Green has pieced together an amazing work of art that is hilarious, heartfelt, and very fulfilling.
After Katherine XIX breaks up with him, Colin hits the pavement with his best friend Hassan Harbish and lands in the small town of Gutshot, Tennessee. While there, Colin attempts to make a formula which will allow him to predict the longevity of any relationship, and at the same time, tries work out his problems on love and life. To the untrained eye, An Abundance of Katherines may appear to be yet another generic road trip book. But when looked at closely, one finds that the realistic fiction novel is clearly unique and easily separates itself from the mediocre.
The realism in An Abundance of Katherines is one of the many reasons why the book is so successful. The unbelievably genuine characters have great depth and variety. Everyone in the novel lives and breathes, and Green’s descriptions paint them perfectly. Whether it’s Colin or Hassan or any of the other many characters you’ll meet, you’ll find they’re all extremely interesting and shockingly similar to your own friends. The dialogue appears to have been pulled straight out of teenage throats and shows each individual character’s personality. Not a word feels out of place, and every sentence flows freely and naturally right after one another. If the book was any more authentic, you would swear it was nonfiction.
Green puts many different elements into An Abundance of Katherines: morals, jokes, and even some history; yet it all works. Every aspect of the novel feeds off one another and, collectively, they make the book great. The pacing of the story is superb as well; interspersed with the narrative of Colin’s current life are flashbacks to his times with the various Katherines he’s been with, specifically the first and last ones. This makes you want to not only want to find out what happens to Colin in the present, but also discover what has happened to him in his past. Green also writes intelligently; he never goes for the cheap laugh, and every historical reference has a place in furthering the plot. Although some may find the book to be tedious at times and a bit predictable, there are enough laughs and surprises to keep it moving along. What you get is an amazing work of fiction that seamlessly ties together all the facets of Green’s mind together.
Equally interesting and eye-opening, An Abundance of Katherines (which was a Michael L. Printz Honor Book and a Los Angeles Times Book Prize Finalist) will entertain you and at the same time give you a different perspective on life. It’s a novel that tells you to think of the past and to look to the future. It’s mathematical and emotional, hilarious and though-provoking, heartwarming and tear-jerking, and altogether great. Colin Singleton and his story will stay with you a long time, even after you’ve finished reading the last page. 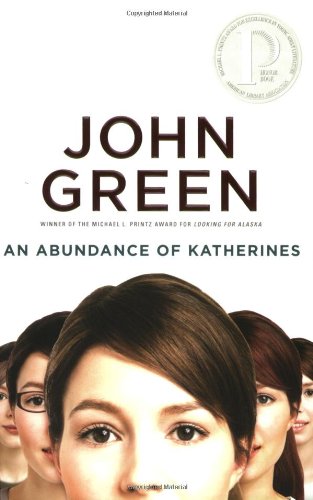