Scott Pilgrim Gets It Together by Brian Lee O'Malley | Teen Ink

Scott Pilgrim Gets It Together by Brian Lee O'Malley

Couple of days ago I finished a book called Scott Pilgrim Gets it Together by Bryan Lee O’Malley. This graphic novel is the fourth volume of this comical series. If you are under twelve years old, I recommend not reading this book, because your parent may get upset with the language and actions in the book. I would have to say the themes of the story are sense of self and good and evil.
The series is about Scott trying to fight his girlfriend’s evil ex-boyfriend’s. The story is about a boy Scott Pilgrim who moved from Canada to California. He is about 23 years old. The beginning of the book starts off with Scott and his girlfriend Ramona at Julie’s (Scott friend’s Stephen Stills girlfriend) birthday party. They played volleyball until it got dark. They formed a campfire Stephen played a few songs, and then all the friends meet at Julie’s aunt house. They just talk drink and get drunk. The next day Kim Pine (Scott‘s ex-girlfriend in high school, but best friend now) is moving to a new apartment and Scott is helping move her stuff. Scott goes to the mall to cool down because the air conditioning doesn’t work in his apartment. While sitting on the bench, he meets his old classmate Lisa Miller. Lisa and Scott hang out and reconnect with each other. The group of friends (Scott, Kim, Julie, Stephen, Ramona, Knives, a teenager who is obsessed with Scott, and others) usually meet up at Sneaky Dee’s. Sneaky Dee’s is like a diner. Scott introduces Lisa to Ramona, but Ramona gets a little jealous of Lisa. Throughout the book a ninja looking man with a sword tries to kill Scott. Scott also encounters another one of Ramona’s “ex-boyfriend”. When you find out who the ninja guy and the “ex-boyfriend” are, you will be shocked.
When I first saw this book, I thought it was going to take me forever to read it but I was able to finish in about 2 hours. I’m not the fastest reader, but this was an easy and quick book to read. I thought the book was going to be childish because it is like a comic book, but I was wrong. There are a lot of contents for teenagers and older adults. Some materials are immature but they are very enjoyable. Throughout the book, I wasn’t very bored because there was a lot of graphic and amusing dialogue.
Overall, this book is a great relaxing and stress reliever book for teenagers and young adults. As I mentioned, I chose the theme good and evil because Scott Pilgrim who is good has to fight his girlfriend’s evil ex-boyfriends in order for them to keep on dating. I also chose the theme, sense of self because Scott figures out what he wants and he can do anything he sets his mind through in the book.
I liked the book, because it was easy and relaxing. It was a good book to read after a long week of tests and quizzes. I hope you will have time to read this book and enjoy it! 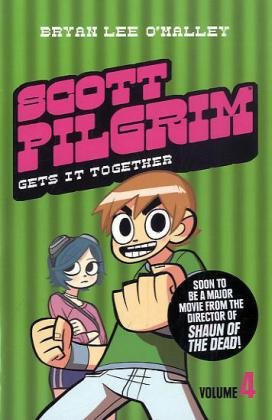