The sequel to Stargirl's first high school experience is set in a very small town in Wyoming. The story starts off only a few months after Stargirl and her family leave Arizona. Stargirl's confidence took quite a few fatal blows while in high school. She is being home schooled again. During the summer Stargirl hangs out with a six year old named Dootsie and she gets a job as a gardener. Stargirl still regrets what Leo did. She hasn't gotten over their break-up at all. She cries about it almost everyday, so she has never given herself a chance to move on. At on point she says to herself “Leo Save me from an empty wagon ”. The more Stargirl thinks about never being able to see Leo again the more unhappy she becomes.

Love, Stargirl is an enlightening story of a girl who finds herself and learns to be at peace with her past with the help of a very wise but strange group of friends, who also let go of their fears along the way. Jerry Spinelli shows how a circle of friends lifelong friends can show you who you truly are and how they can help heal an injured heart. The book Love, Stargirl also shows how friends can cause a great amount of change. Although to see the full effect of those changes the reader must first complete the book. In Love, Stargirl emotions area clearly shown but the intentions of characters including Stargirl's were sometimes hard to grasp.

Love, Stargirl is spewing with characters that are unlike anything you could ever find in the fiction world. The are all very much alive in the eyes of the reader. Stargirl's story starts off slow, but captures your attention early on. Although, some of the events seem to be thrown in just for fun, they all tie up the book fairly well. Love, Stargirl should be read by teens who have read Stargirl and would like to see her story come to a close.
Rating : 3 out of 4 stars 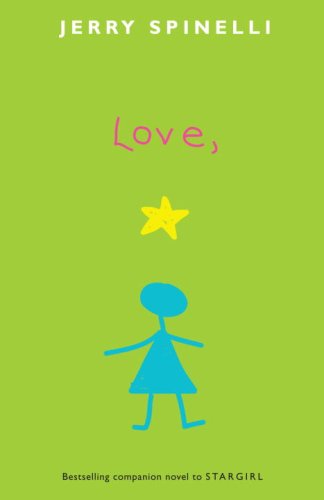