Though Peeps may bring to mind images of sugar coated marshmallow bunnies, this new novel is far from a sickly sweet read. It’s a faced paced science fiction novel, seamlessly blended with adventure, romance, and even a little horror, leaving you turning the pages and craving for more.

Author Scott Westerfield joins the vampire craze with his new novel, Peeps. His novel features teenage protagonist, Cal, who happens to be a vampire. However, the similarities between this book and other clichéd vampire stories end here. Westerfield describes vampirism scientifically, and describes it as being a disease.There are no magic or supernatural forces involved. This disease is cause by parasites, and the term “vampire” is used rarely in the book. It’s referred to as parasite positive, or peeps for short.

After a one night stand with a mysterious woman named Morgan, Cal becomes one of these peeps. However, due to a genetic mutation, he can live a normal life without the devastating effects of the sickness. Instead of becoming cannibalistic and destroying the things he once loved, he has only the perks of being a peep- super human strength, smell , and eyesight. Despite these additions to his character, Cal is still a teenager, dealing with girl problems and struggling to fit in. Now, it’s Cal’s job to hunt down other pees, and stop the virus from spreading and infecting even more people. That includes tracking down the strange woman who infected him.

Throughout the story, told in first person narrative through Cal’s eyes,Westerfield describes some parasites in great detail, explaining how they are necessary in our world, as well as the disastrous consequences they can have on their hosts These chapters are not for the weak stomached though, and featured descriptions of hookworms, plasmodium, and screw flies that some may find sickening. Others may find these descriptions entertaining, and read to learn more about the parasites that make up our world. Cal describes these parasites and their importance ti the plot in just enough detail- he explains what’s going on, but leaves you with a small enough amount of information to keep you guessing.

This book stands above the rest with its unique plot line and thrilling chapters. Scott Westerfield has produced another science fiction masterpiece , and it should be picked up by all teen readers. His book won several notable awards, including an ALA Best Book of 2005 for young adults. So, if you’re looking for an exciting tale, make sure you have enough time to read it entirely through, because once you start, you won’t want to put Peeps down for a second. 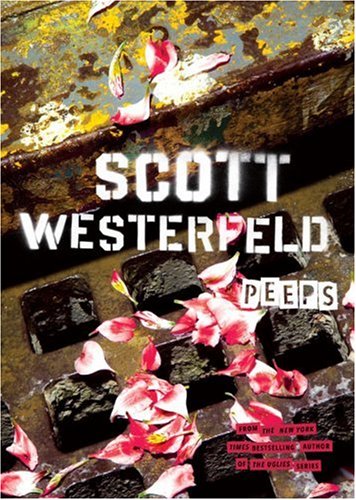 Joi Dallas said...
on Oct. 24 2010 at 6:35 pm
Joi Dallas, Philadelphia, Pennsylvania
0 articles 0 photos 2 comments
View profile
I loved this book, I read it all in one sitting. There were a lot of really funny parts that were awkward and made the story that much more realistic. The parasite chapters were very interesting and informative while still retaining the same tone of the overall story. A good read I say.