Favorite Quote:
"The fault, dear Brutus, is not in our stars,
But in ourselves, that we are underlings. "


-Cassius, The Tragedy of Julius Caesar by William Shakespeare.

Michael Crichton earned the title of one of the best science fiction authors of the time. His novel Timeline proves that statement is accurate. Timeline tells the story of a group of graduate students sent back to medieval France to find their professor whom the technological company ITC previously sent there. The first half of the book occurs entirely in modern day at ITC headquarters in the New Mexican desert to the graduates’ archeological sight of Castelgard in France, sponsored by the company. The second half toggles between the fourteenth and twentieth centuries, detailing the problems of the students who went back and ITC and the student who stayed behind. Catastrophes occur on both sides, from death and the troubles of coping with a violent and forgotten society of the Middle Ages to the technological issues concerning highly advanced equipment.

Crichton seamlessly blends the historical and scientific elements. The descriptions of the medieval world are clearly well-researched and highly detailed. The use of science provides a believable explanation for how time travel and the multiverse are feasible through quantum theory. The human elements and the changes that occur in character when one endures traumatic events play a central part, equal to the science. The novel is also a world-class thriller, rivaling his previous books such as Jurassic Park and The Terminal Man and easily beating some of the major blockbusters seen in movie theatre, for considerably less money, featuring jousting matches, sword fights and battles, daring escapes, and a race against time complete with twists and turns.

The cast of characters represents the complete spectrum of the intellectual body, with overriding arrogance, greed, obsession, curiosity, and naivety. They invoke adoration, admiration, and loathing, and above all cause the reader to want to continue reading. Every unexpected event has a strong human element connected to it, making it better than a chronicle of robots. While the technology involved is undoubtedly important, the story is very character-driven, somewhat unusual for a science-fiction novel and even a thriller.
I found Timeline a very enjoyable read that I did not want to put down. I’ve personally heard nothing but rave reviews about the book from fans of Michael Crichton and science fiction to those who typically do not enjoy such books. A base knowledge of quantum theory was helpful, but only as much as understanding what it is. If you enjoy science or history or a good thriller in general, this is a must read book. I absolutely recommend it. In my opinion, it’s one of Michael Crichton’s best. 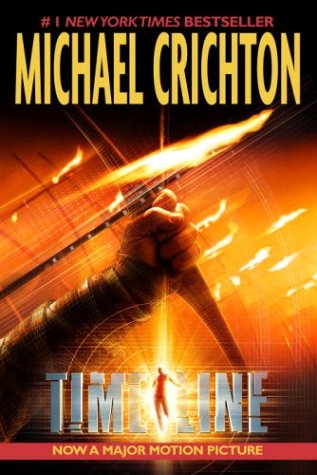