What do you do when you are nine years old, your father just died, and your mother is with another man you don’t even like? This is the problem faced by the main character of Extremely Loud and Incredibly Close by Jonathan Safran Foer. Oskar, the main character has to find out what to do as he rebuilds his life from the ashes of his old one. While he comforts himself in the closet of his late dad trying to find out what to do with his life he finds a envelope with the word “black” on it with a key inside, thus starting the story of the book, Oskar’s quest for answers.

The author of the book, Jonathan Safran Foer, was born in Washington DC from a Jewish based family and is one of three sons of Albert and Esther Foer. Jonathan is also a graduate of Princeton of 1999 and has a degree in philosophy. At Princeton Foer started a thesis that the author Joyce Carol Oates took interest in, starting his career as an avid writer. After graduation Foer traveled to the Ukraine to expand on his thesis, after returning from his travels he went back to work and with the help of Oates he created his first novel Everything is Illuminated. The novel won him the National Jewish Book Award and the Guardian First Book Award, the novel also was turned into a movie by Live Schreiber in 2005 which starred Elijah Wood. His second book which is Extremely Loud and Incredibly Close was published in 2005, besides his literary work Foer also created the libretto for an opera titled Seven Attempted Escapes From Silence, which premiered at the Berlin State Opera on September 14, 2005.

Foer chooses to write in a very new and different style of writing, first off he writes of the story of recent novels deal with how the world has changed since the 9/11 terrorist attacks in New York City, and how our perception of the world has changed because of it. Foer instead writes of the effect on a single family and tells it through first person of one Oskar Schell. Second he writes in the stream of conciseness always moving from one topic to another in somewhat meaningless ways, but most of the random written comments and pictures tie into the novel as you progress. His use of diction is a mix between what a regular nine year old would say and what an educated adult would say. For example Oskar, like most young children would make up words to fit their surroundings even if they already have words such as “Jose” for no way. Then there is the flip side of the character Oskar, Foer writes of him having reasoning skills of an college educated adult, making rational decisions about irrational situations that most nine year olds couldn’t comprehend.

As for the books Plot it follows Oskar, a very intelligent 9 year old boy, who is the main focus of the story along with his quest for answers about his dad death in the 9/11 attacks on the world trade centers. As mentioned before Oskar’s quest begins when he finds a key in a vase in his dad’s closet, from there he starts his journey with him looking for people with the last name of “black.” From there he finds Mr. Black who agrees to help Oskar with his quest and they both start looking for clues as to where the key would belong. In addition to Oskar telling his story of the search for the secret of the key, the letters from Oskar's grandparents tell their story, and how it all led to this point in Oskar's life. His grandfather, also Thomas Schell, was a teenager in Dresden during World War II. He fell in love with a girl named Anna, and after the firebombing of Dresden, he'd lost Anna, all of his family, and the ability to speak. He has the words "Yes" and "No" tattooed on his hands, so he can answer questions by showing the appropriate hand. For conversations he writes in a notebook he carries around and communicates through that.

This book to me is a very enlightening and makes me feel more connected to the character of the book to 9/11 than most other books because they are just broad based views and not personal. Not only is this book personal but it is a believable character, Oskar is a genius but he makes his own mistakes and he is still confused by most of the bigger picture of life because of his age. This is a must read book, also there are really cool pictures throughout the book if you are like me and you have something to look at as you read. 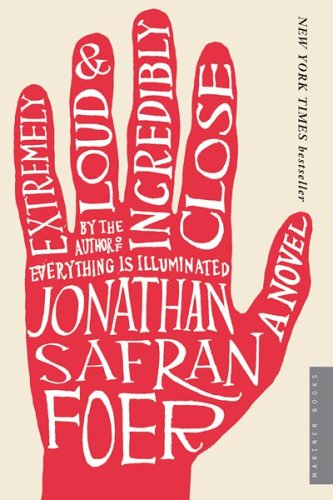