Was she not an angel?
A “tsk” to the person who did not know
her name.
Demeter, the mother to the so-called virgin, though herself not so clean,
Birthed Persephone, destined to be the
destroyer of light.
Together, mother and daughter reigned the Earth to flourish all life and their
Offspring,
Without them the world would have no
flowers to love, thus no love to be gained
or lost in the nonexistence of the team.
But what was to become of us when the pure girl disappears?

Hades, the husband of never-to-be stole her body to the fire,
Down in the shadows was she not raped?
Her reputation burst to nothing but tears.
But why is she kissing him?
Tell me she is not telling him that she
loves him.
Prove me wrong, O mighty Gods, is
she insane?
The angel was attacked and abandoned above the demons beneath Gaea's archipelagos.
Persephone, born to be the destroyer of light.
Fulfilling her name, as to what is to show is no more.
Hermes, have you to help her hack this Hades and heave away?
Yes, was echoed.

O golden wings of her possession, bring her back to heaven and me, cried Demeter.
Thus, Hermes floated below the sins of the world, below the sea of Poseidon, below the clenching jaws of the aquatic monsters, and deep within the hell of Hades.
White daughter of Earth come home, I plead, cries Hermes.
Renewing her halo glow, she let her husband's hand go and allowed one last glance to him,
There, her childish eyes restored their shine and his receded to nothing but a hard line and sadness.
One day, you shall see my soft soul once more and never will I forget my love,
Persephone cooed.

Half the life of one year,
Demeter is cruel and lets the ground
hardened with snow.
Thus, when the angel is not with her husband but rather at her side,
The ground is soft with the pillow of flowers and greens.

Hath not her love for Hades,
Persephone, the destroyer of light,
Would not be the Goddess of the Underworld.
Deceiving her name,
She brought such light into his heart,
Thus, never more the virgin. 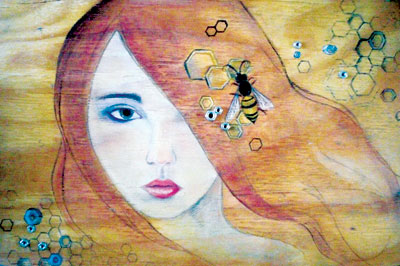 Favorite Quote:
Quoting yourself makes you an ass.

View profile
I read this out loud and it is very lyrical I love it. Such a deep saddness though.
Milo! said...
on Apr. 9 2010 at 12:28 pm
What a great piece. It’s so understandable. You made it really easy to see where you’re coming from. I hope you keep writing, because this is really good. You should check out some of my stuff. I think you would like it.