The sweat trickles down my forehead 33 seconds before the referee blows the whistle. When I walk toward the line, I look directly into my opponent’s eyes. He looks back into mine. He sees that I am a man who doesn’t like to procrastinate. When I have a job to do, I get it done. He sees courage in my eyes. He sees the eyes of a man who loves to take risks and has no problem being held accountable for his actions. The referee gives the cue and we shake hands. The whistle blows and the wrestling mat becomes a war zone.

I circle the mat and he mirrors my actions. I can see that he is quick, but he realizes that I am waiting for him to strike. I am a defensive player. I like to refute and to have an answer when one is needed. He strikes, but I see it coming and swiftly move away. I smile. Now he knows that he has to try harder. He strikes again, but this time I deliver a legal blow to the face while moving my feet. We call it a “cross face” in wrestling and it takes a lot out of him. He’s frustrated.

One minute of the first two-minute period has passed and he has not scored. But neither have I. He sees that I stay calm under pressure. I don’t panic because then mistakes happen - like the one he is about to make.

He strikes again, this time at my leg that is farthest from him. I spin out of his grasp and twist around his body. We’re on the ground and I am on top in total

I stay calm and consistent while working a move. He panics and has no chance. In seven seconds I bring his arm to the side while interlocking it with mine, a move that we call an “arm-bar,” a “two-on-one.” I twist it and he rolls to his back. Another six seconds pass and he is pinned. I stand the victor. No sweat and no sign of fight. He shakes my hand, and the referee raises my arm to 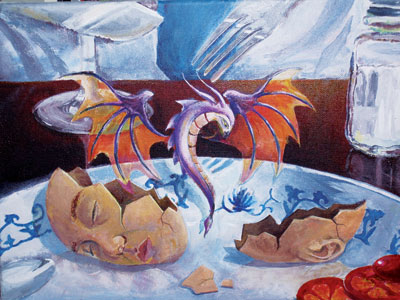