There was a point where I didn’t even know if I was actually talking out loud.

“Can they hear me?” I thought to myself.

The sun was shining high above my head and I felt small drops of sweat settle on my forehead. I stood on the corner of the soccer field by myself and looked around; on the other side of the field one of the teams scored a goal. All the boys celebrated and continued with the game, behind me, my friends sat on benches after another failed attempt of playing soccer in our gym class.

Because we are girls.

I wanted to join them; there was no sense on walking around the field pretending to play soccer, screaming like a maniac for someone to pass me the ball, when none of the boys even acknowledge the fact that I was there. But I didn’t want to let them win. I didn’t want a bunch of stereotypes and stupid ideas to stop me from playing.

I talked to our coach about it.

It was more like a debate than a conversation.

“You lazy girls spend hours sitting under the shade of trees!” He said “Painting your nails and talking about boys.”

After a long, heated discussion he decided to give us a chance.

The next day he split us into two teams and explained that goals would only count if girls scored them. For a small moment I felt proud. It wasn’t exactly what I was looking for; I didn’t want to force boys into passing us the ball, I wasn’t looking for special treatment for girls, but it was something.

It lasted a few seconds, feeling proud. After our coach stopped talking, all the boys turned around and walked off the field towards the volleyball court.

The good feeling immediately vanished. It was replaced by something heavy and dull. My mouth went completely dry and a small tear slipped down my right cheek. I dried it off rapidly with my sleeve, hoping no one had seen it.

I have heard thousands of conversations about how far we’ve come as a society. How some decades ago women couldn’t vote or go to school. How now the future is bright for woman and we have the same opportunities as man.

But the fact that a group of sixteen-year-old boys couldn’t stand playing with girls, in gym class, at school, changed my perspective.

And I have heard the argument a thousand times.

“Boys are better at sports than girls because their bodies are built differently.”

That’s not a reason to feel superior or better.

We are girls, and our bodies are built differently. Maybe we are not as fast or as strong, maybe we don’t have the same reflexes. But we have the same desire and competitiveness inside us. We have hope, and when we want something we’ll work hard until we get it. I say this because even though there still are some differences, it’s written all over our history.

We can vote.
We can work.
We can study.
We have a voice.

The next gym class the boys took over the soccer field again, and most of the girls, feeling a little hopeless, decided to do something else.

So I walked on the field, and I ran, but I didn’t ask for the ball anymore, I fought hard for it. When I finally got it I dribbled towards the goal, pretending not to hear all the shouting that asked for me to pass the ball.

“I can’t hear you.” I thought to myself.

When I got into the box, there was just the goalkeeper and me. With one swift movement I shot the ball towards the lower corner and I heard the smooth sound of the ball and the net coming together for one quick instant.

I realized everyone had stopped shouting, and when I turned around all eyes were on me.

Can you hear me now? 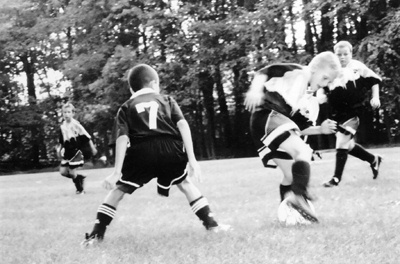 View profile
Thanks for the comment, I'm glad you liked it ! You should try writing about this topic too, I'm sure you would do a great job :)
athenathepixie SILVER said...
on Jul. 29 2014 at 12:03 am
athenathepixie SILVER, Brooklyn, New York
5 articles 2 photos 10 comments

Favorite Quote:
"Laughter is the sun that drives winter from the human face." -Victor Hugo

View profile
Hi! This is a great reflection on women's rights! We must keep doing things like this as women to show our strength- thanks for the inspiration! :)
ahheredia GOLD said...
on Jul. 27 2014 at 12:59 am
ahheredia GOLD, Mexico City, Other
10 articles 0 photos 8 comments

View profile
Thanks for the comment, it really means a lot. I'm glad you enjoyed it and that you understood where it comes from. As you said, this type of situations tend to be overlooked, I just want to make people notice. Thanks again :)
FreeWrite said...
on Jul. 26 2014 at 10:47 pm
FreeWrite, Richmond, Virginia
0 articles 0 photos 6 comments
View profile
Hey, I just wanted to let you know that I think your article is amazing. I am a guy, and though I am a strong supporter of women's rights, this definitely opened my eyes even more. I come from a society where stuff like this is completely overlooked, and so I hope your ideas are eventually spread through other girls hoping to change the world.