Finding a Way Out | Teen Ink

Finding a Way Out

Few people know how it really feels to feel like you’re spiraling downward into a black hole and you’ll never be able to find a way out, but I have.

For a 13-year-old seventh grader, I put myself – and got myself – into a lot. More than a lot of people do in their life time. Yet, somehow, I never got caught, and I never spoke up. Few people – if any – know my whole story of that year. Even now, I’m still struggling to get completely back on track, but I believe I’m doing a great job.

I never really realized what I got myself into at the time; it took months before I did. Even know I don’t know how I could have let it all happen. But it doesn’t really matter why or how, it just matters that I did. Sex, drugs, alcohol, cigarettes, rape. At the age of 13 net very many kids have experienced all – or any – of those things. But me.


I guess I’m getting ahead of myself, because in many ways my story started way before that. Nicholas. I was 12 and he was 13. For months we were the cutest couple you’d ever see. Until one day he broke my heart. I suppose that’s where it really started. It wasn’t until about a year later when I first met Drake. I fell in lust with him very quickly, mistaking it for love. All I wanted was what Nicholas and I had. I thought I finally had it again but I was very, very wrong.


A few weeks after we started dating we went into his room to just hang out (or so my naïve 13-year-old mind thought). He started kissing me like he did everyday for weeks, and I thought nothing of it. Until he tried taking off my pants. At that instant I started saying no, and continued for quite some time. But have you ever seen a 5-foot
13-year-old girl try to stop a 6-foot 17-year-old guy from doing something? I’ll tell you right now, it doesn’t work.

For a while I just kept telling myself he loved me and I love him. Now I realize if it were true that would never have happened. None-the-less, I didn’t break up with him like I should have, because remember, “I loved him.”

Eventually I started hanging out with him and his friends on a regular basis. They weren’t the best of crowd; imagine a seventh grader hanging out with a group of high school drop-outs. I wanted to impress them all, and more than anything I wanted to be accepted, and after that first sip of stolen alcohol, first puff of a cigarette and cussing like a sailor, I was. It all seemed so easy until it got out of control.


It went from innocent fun to an at-least-a-few-days-a-week-addiction. It started to be the only thing I looked forward to. Here’s a girl who believed in God, wanted to wait until marriage, never wanted one sip or one puff, to a border line addict who became atheist, or close to it. My whole outlook on life got turned upside-down. All for some boy. He was great to me for a long time, though, I must admit. Until the cheating and lying started. By then I was too afraid and too attached to leave him, or my new group of friends. Every weekend all we did was drink, do drugs, and run from cops. It was all just fun and games to me. “Until someone gets hurt,” of course. That someone ended up being me. Not from alcohol poisoning, not from cancer, not from cops, and not from death. From the one person I gave everything up for.

Although many times he begged for me back, by then I didn’t really want anything to do with him. I can’t say I was over the drugs or alcohol, because I found other ways to get it and other parties to go to. But I moved on and now I haven’t touched a bottle, pot or cigarettes in months. I left behind best friends and boyfriends to get where I am now. I went from being in a black hole to finally seeing a glimpse of light.

After everything that happened, I found a way out. Many times I thought suicide was the answer, now I know “no” is the answer. Don’t change yourself for anyone. Over a year later, I can honestly say I’m happier than I’ve ever been because I found that way, and reason, to change myself. 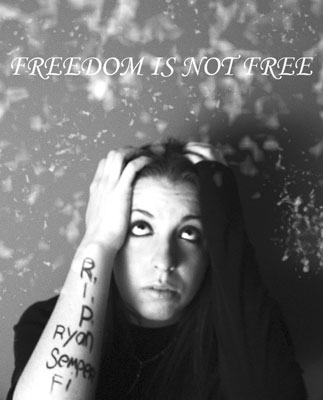