When Time Travel was Real

The night is cold against my bare shoulders. I lean against the cold metal pole of the playground and survey my group in the darkness all around me. The Twins sit, balancing perfectly on the motionless teeter totter, and stare off at the red moon. Sam sits on a swing, leaning forward with his elbows on his knees, anticipating. The Other Sam perches on the green plastic roof of this playground, keeping lookout for anyone- or thing- that looks suspicious.


There. There it is. What we’ve been waiting for. It’s time. Nearly silent, Other Sam slides off the slick plastic roof and lands like a cat in front of me. The twins move, almost at the same time, flipping themselves off the wooden beam and landing in unison. Sam stands up, joining them at the edge of the padded playground floor. I unfold myself and slip out from underneath the playground, my black hair tucked behind my shoulders.


“Not in the least bit,” he says. He sticks his hands in the pockets of his dark colored pants. The twins, Aileana and Aryan, link a rms together. Sam crouches, half up and half down, studying the character hurrying toward us.


“You the people I want to see?” He asks, setting the case down by my feet.
I reach and pull the small package from my wrist, unwrapping the strings that kept it tethered there. Setting the bundle in the palm of my hand, I hold it out infront of me. The man takes it, careful his fingers don’t accidentally brush against mine, and sets a small rectangle of metal into my open palm.


“Nice doing buisness with you,” The man says. I nod, pick up the suitcase by the worn, leather handle and walk in the opposite direction. I don’t stop until I reach the edge of the woods. The rain starts, large heavy droplets that fall on my face and drip off the end of my nose. In the center of the woods lies a dead tree, spanning like a bridge across a dried up creek. Stepping down into the rock bottom, I set the metal case on the log. Other Sam stands next to me, Sam and the twins shuffle in across the log.


Other Sam opens her mouth, her voice quiet. “You know there can be severe penalties for playing with time.”


The twins start to talk, speech bouncing between them, as usual.
“This Time you bought-”
“-are you sure it’s good time-”
“-because it would be awful-”
“-to get Time Conned.”


“Yeah,” Sam says, “Especially if your past self sees your present self.”
“I know, guys,” I say, opening the silver case, “I’m aware of the dangers.” I take out a small metal box with wires sticking out at random angles and lights blinking in random intervals. I take the small rectangle the man gave me, sticking it into the key slot. All the lights on the cube shine red, then green, then they stop completely.


“I won’t,” I say, more assuring myself than the others. I lean against the log and with a deep breath, I push the button on the box.

There’s a bright flash of light and… and…

I’m alone in the middle of the woods, leaning against the log. No. No. No. This can’t be right. There’s no way this is right. I didn’t go back far enough.


There’s a crunch in the woods. Through the branches of the trees, and with the faint moon beams, I make out the silhouette of Sam. Walking right next to him is me.


With horror, I make eye contact, knowing in my gut that I messed up big this time.


I sit on the bench with the cushion. The cushion is there to make the bench seem comfortable, but it lies. In my right hand is my wallet, and in my left is a picture. Of her. She was young when this picture was taken, but we were young when we got married. We met at the beach, and it was an instant connection. We knew we were in love, and we got married three months after meeting.


“Mr. Parish?” A nurse says from the doorway.


“Yes?” I say, standing up and stick the wallet back in my suit pocket.


The nurse pulls her blue hospital mask down from her face, down around her chin. She takes a deep breath. “We were successful. We were able to bring Lucy through time, back from before her death.” The nurse gestures through the doorway.


A young woman steps through the doorway, brushing her blonde hair back from her blue eyes and staring at me. Lucy.


“Lucy,” I say, rushing toward her and embracing her in a hug. I smell her perfume, the same she wore on our first date. She’s exactly the same height as she was at our wedding, her blonde hair the same length.


I pull back, finally releasing her. “I’m so glad you’re back,” I say.


Lucy looks at me, blinks, smiles. “Thanks. But one question,” she tells me.


“Anything, sweetheart.” I take her hand and kiss her on the cheek.


Another smile, she tilts her head. “Who are you?”


He leans back in his chair, “That’s what they all say.” He exhales and a stream of smoke joins the pool on the ceiling. I just look at the table in front of me and try to ignore the handcuffs digging into my wrists.


“If you won’t fess up now, I’ll get it out of you later,” the cop says, standing up. He nods at the security guard at the door, who moves aside and lets him through. Another guard pulls me out of the cold, metal folding chair by the chain that connects the handcuffs. The burning metal digs in and makes the mark around my wrists deeper.


They put me back in my cell. I sit on the floor and stare at the wall, the grey metal covered in graffiti. There isn’t much to do when you’re in jail. Accused of a false crime, one you didn’t commit. But nobody believes me. Why would they.


“Rufus Maguire?” A woman says through the bars. She’s short and stocky, with a square jaw and a black bob cut to match it.


“You truly didn’t commit the crime charged against you?”


She nods, the bob shaking back and forth. She says to the guard standing next to her, “Let him go. He didn’t do it.”


The guard looks confused. “But, ma’am, are you sure? He’s going for capital punishment next week.”


“Of course I’m sure,” the woman says, flashing her government issued badge. “I went there and saw it with my own eyes.” 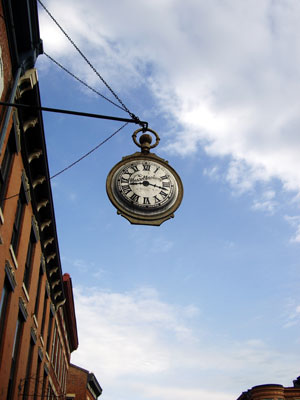 The begining story was a quick, thrown together story for a writing contest a club at my school was hosting. Needless to say, I didn't win. But, I went back, revised, added the second and third parts, and here I'm uploading it.