One of the first things I learned from then on was that life is a vice. It is a scandalous rose, covered in thorns and immersed in poison. It is a wild dog, gnawing onto your bones, devouring your entire soul.


I am hated in this world. Hated because I do not know, and because I am not worth living. And I guess that's fine. If I cannot contribute to this world, I cannot live. I shouldn't live.

because I impede society, and because I am an imbecile.


And I brought up my knife to my throat. Trembling, I pushed it deep into my flesh. Death seemed so pleasing, the end to anything I needed.


I hated this wicked world.

Why did I need to live.


I cried. Why did the world have to hate me? Because I was a moron, a dolt.

I was an idiotic mistake, the pain of society.


I wanted to die.


I remembered the discrimination and the treatment of the imbeciles. The whips, the scourging, the hate.


I thought of the loathsome attitude the people I once called friends possessed.


I pushed it deeper, twisting the stupid blade into my stupid soul. I choked on the impact, spewing dark red liquid. I felt immense pain shoot up my neck. The effect was gratifying.


I thought of the trite obscenities and vulgarism purposely directed to people like me every day. I guess I deserved that. There was no need to live anymore. Let me die.


A black hole opened up in on my eyes, and I began to slip away from the world... deeper into the unknown. Deeper. And deeper.
But there had to be a stupid hamper, impeding my stupid actions. There was a sharp whisper wending into my ear, telling me to stop.


I ignored it, rebelliously shutting out the world and its inhabitants. Why did I even live?


Then it came again, a shrill screaming desperately telling me to stop. I opened my eyes to see a wretched girl about my age, wrestling the knife away from me.


The police. They were here.


So I fought her with the best of my pierced energy. I kicked her away from me, and she went flying away from me. And for a brief second I saw her hair part and her massive, disgusting “I”, drilled onto her forehead.


She rushed back at me, wrenching the knife from my hands, making sure I halted my suicide attempt. The strange girl victoriously ripped the knife out of my hands and threw it away in the forest. I saw it fly in the air and land, far, far away.


I desperately clambered after it, but I was tackled with surprising force. She pulled my bloodied face up close to her mouth and screamed into my ear, "Nothing is worse than death! There is nothing ever in the world that you should kill yourself for!" And I slowly closed my eyes, fainting after hearing her last words, “Stupid, stupid. You're so stupid…" 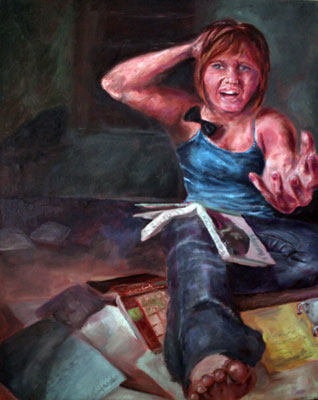 Ivy League, SATs, AP courses - what could our world turn into if we keep going at this pace? What happens when your life is defined by a single test score?