The Pizza Delivery Guy and the Antidote | TeenInk

The Pizza Delivery Guy and the Antidote

“Okay, last delivery, mom. Now, what was that thing you said about getting groceries?” A teenager held his phone between his ear and his shoulder as he struggled to pull his keys out of his pocket, juggling the last pizza boxes of the night to deliver.

“Get the milk after your shift, not with the other items?”

He glanced in the backseat, cringing at the sight of a milk carton.

“Well, whatever you do, take a shower before you go to bed, or your bedroom’ll smell like pizza for the next month. That’s not an attractive smell, Todd. Do you think you’ll get a girlfriend smelling like pizza?”

The pizza boxes flew off the seat to the floor as he backed into something.

“Hold on, Mom…” He parked the car and jumped out to check the damage, then screamed.

“What is it?!” his mother asked frantically.

“I RAN OVER A GIRL WITH MY CAR, MOM!” Todd yelped. “Whywhywhywhywhywhywhy…” he panicked as he pulled her off the ground, glancing around wildly for witnesses.

“This is what I get for playing video games instead of going to the prom…” he said as he lifted her into the backseat along with the groceries. He twisted around from the front seat and grabbed her wrist.

“Okay, she’s still got a pulse, mom…” He looked up at her face. The glow of a streetlamp gave her an angelic appearance. “She is kinda pretty.”

“TODD! I don’t care if she looks like a female hunchback of Notre Dame, get that girl to the hospital right now!” His mother screeched.

The girl in the backseat peeked one eye open when she thought he’d looked away, then glanced at the panicked guy with a raised eyebrow. She noticed tire track marks smudged on her jacket.

“Wha- you’re conscious?!” Todd jumped at the sound of her voice, nearly missing a mailbox as he turned to look at her.

The girl grabbed the back of his seat as the car swerved. “No,” she said sarcastically.

“Don’t worry, I’m not kidnapping you- you uh, passed out on the sidewalk so I’m taking you to the hospital…”

“Oh, cut the act, I know what happened…” The girl rolled her eyes.

“Great. Just great. It’s people like you that’re gonna put me out of work, you know that?” She shook her head, then paused. “Yech, what’s that smell…?”

“Milk. Sorry.” Todd said. “Now, seriously, how did I not kill you? I hit you at like thirty miles per hour and literally ROLLED over you with my back tire! I’m really sorry about that by the way- oh, watch out for the pizza-” he pointed as she climbed into the front seat.

“Look what you’ve done! What kind of pizza delivery guy are you, dumping the- oh, no! I stepped on a piece!”

“Don’t dodge the question.” Todd said, flicking a pepperoni off of the dashboard, then squinted and began to wipe at the grease with his jacket sleeve.

“Hey, eyes on the-” The girl looked up and screamed as they careened off of the road, headed for a tree. She held her hands up in front of her.

Todd was dumbfounded. All of the passing cars and pedestrians were frozen. The world around them had become completely still.

Eyes wide, he glanced at the girl in the passenger seat. Breathing heavily, she kept one hand up and used the other to turn on an earpiece.

“Erica to mission control, the subject is secure. Over and out.”

Todd flinched. “What’re you gonna do with me?”

Erica rolled her head back with a sigh. “My cover’s already blown… I’m from the future.” She sighed. “Okay, I’ll give you the spiel… everyone is highly evolved and advanced and now we’re indestructible, thanks to the flu vaccine of 6009. We lost the need to eat a long time ago, so there’s no food left on the planet. Unfortunately, a huge asteroid crashed to Earth and has been secreting some foreign gas that’s infecting the population-”

“So what do you need me for?” Todd asked.

“What- no, you’re not the subject.” Erica picked up a slice of pizza off of the car floor. “Triple Cheese Supreme with the works. I’ve been tracking you down for the past four weeks, waiting for someone to order one. Didn’t expect to get hit by your car in order to get it, but I got it.” She smiled at the pizza slice, relieved. “Once I take it back to headquarters, it can be cloned and rubbed onto the skin of the survivors. It’s the only cure. Now, quick, get out of the car, I have to unfreeze the perimeter.”

Todd, bewildered, followed her to the sidewalk who had one hand still outstretched and the other holding the pizza.

Once they had reached a safe distance, she let her hand drop and the world sprang back to life, causing the car to ram into the tree.

“That was the company car…” he sighed.

Erica turned to him. “Thank you for creating this antidote-”

“Oh. Well, your delivery services- as shoddy as they may be-” she muttered, picking a hair off of the dumped pizza slice. “-have served your planet.”

Erica turned a knob on her watch as he watched her atoms ascend to the atmosphere.

He answered his cell phone as he began his walk home. “Oh, hi, mom. Yes, the girl’s just fine. You will never guess what I did- saved the planet. Yeah, I know it’s crazy- turns out she was from the future and before she left- wait, what? What’s wrong?”

“Todd!” his mother exclaimed. “I can’t BELIEVE you let a perfectly healthy girl leave this time period without asking her on a date!” 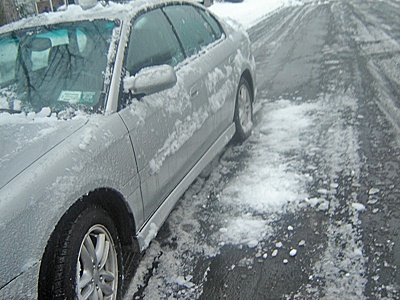 View profile
This is really good. I love how funny it is. Funny is so much rarer than drama and angst in stories. Especially funny done well. I really really liked it. Pizza definitely saves lives. :)