My dad always said I was born with a gun in my hand. You see, my dad and I hunt everything just for fun. He taught me to use a gun when I was three! His only rule is that if I see an animal on four legs, I've got to shoot it, or as he puts it, "Ta git sum respect in dem forests, ya gotta teach 'em who's boss." I used to laugh with him about it until recently, and that's what I'm here to warn you about.

I was in the forest, hunting alone, when I saw a graceful doe with her little, spotted, fuzzy fawns. She saw me, and she eyed the gun, and she stood in front of her fawns, her earnest, acorn-brown eyes pleading with me. It made me laugh. "She's gotta learn some respect," I thought. I shot that old doe, and she died slowly, the acorn eyes slowly giving way to two glassy orbs reflecting the forest around her. As for the fawns, well, they lay down by their dying mother, so I was just going to let nature finish them off. The doe gave one final bleat, in which I thought I heard the word "see" but I wasn't sure.

Inside the gun shed, I noticed something sparkling. It was over in the corner, covered in wispy spiderweb. I peered over my dad's bullet collection and gasped. There, on the muddy ground, was a perfectly carved oak leaf, complete with the intricate veins. With a closer look, I noticed it had eye and mouth holes. It was a mask! Come to think of it, I don't know how it had looked sparkly before, it was just wood. I ran inside to show my dad.

"Ain't nothin' special 'bout that," my dad said. But, as you know, I thought differently. I was determined to find the secret of the mask.

I ran to the woods and slapped it on my face. It fit my features perfectly. Then I felt a ripping, like someone was cutting a line down my back with scissors. I screamed and screamed. Hot tongues of flame were licking my throat. Then my screams gave way to bleats. My writhing stilled. It didn't hurt anymore. I had become a deer. A vulnerable doe. And I knew I would have to face what other deer have faced before me, being hunted down by my ruthless father. Ruefully, I reminded myself that I was just as ruthless as he.

I tried looking for the oak leaf, but it had vanished upon my transformation.

"You are not welcome here," a buck whispered at my passing, "You have killed Mia, my lovely wife." I noticed the fawns I had left by the doe this morning, and a wave of sadness broke over me. I really was a monster.

What did I do for the rest of my life-changing day, you ask? Well, I went to visit Mia, the dead doe and prayed for her life. I wept over her expanding body, wishing to give her her acorn eyes back. The buck saw me and started to spear me with his antler. That really hurt, but not as much as the bullet that had just pierced my skin.

My father, with a wicked glint in his eye, aimed his gun at the buck. He was the real prize with those antlers. I raised my head to receive the bullet. I would do anything, so that God and all the creatures of the forest would forgive me. The bullet came, and I gasped my final breath.

In the last moments of my life, I had learned to love. I am enjoying the glories of Heaven. 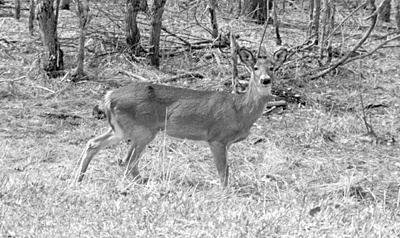 View profile
@AndriaGromley dude. uncool. i thought it was great. especially the title. dont be so openly rude and critical. constructive feedback.
though not to be rude the last line was rushed and a slightly confusing switch.(see. that's how to politely give feedback.)
AndriaGromley SILVER said...
on Jun. 4 2014 at 11:56 am
AndriaGromley SILVER, Hillsdale, Pennsylvania
8 articles 2 photos 113 comments