Jake stood on the steps of Irving Whitehead's house. The time portal sucked closed. "Here goes nothing," he muttered. Jake gave his tie a quick tug, then knocked on the door.
Irving Whitehead opened the door to find a young man, fidgeting with his starched suit sleeves, at his door. "May I come in?" Jake asked. Irving led Jake to the parlor. A curtain of smoke hung in the air. Jake wrinkled his nose. "Is anyone else here?" Jake asked.
Irving shook his head. "What is this about?" he asked.
"My name is Jake. You are representing Carrie Buck soon, are you not?"
"Yes."
"What's your plan?"
"I'm afraid that's confidential."
"Really, because I happen to know you plan on losing the trial. You and I both know
Carrie isn't feeble-minded, and she doesn't deserve to be sterilized."
"Sterilization is what's best for this country. Do you really want a bunch of feeble-minded
people running around, making the country worse?"
"I'll pay you twice what Priddy is paying you."
Beads of sweat glistened on Irving's forehead. "How do you know Priddy is paying me?"
Dr. Albert Priddy had promised no one would know about their deal. Irving agreed to lose all cases with Carrie Buck. Then, their Eugenical sterilization act would eventually be ruled constitutional. Carrie Buck would be sterilized, a small price to pay for ridding the world of the feeble-minded.
"Does it matter? If you agree to represent Carrie fairly and to win all the trials, I'll pay you ten thousand dollars. If you don't, I will expose you for the corrupt man that you are."
"No. The feeble-minded should not be able to do whatever they like. They should not be able to have children."
"You don't want the ten thousand dollars. That's fine. I'll just expose you. Have a nice day." Jake got up from his seat very slowly. He picked up his coat from the back of the chair. Slowly, slowly, Jake dusted off his jacket. Jake had no idea how to expose Irving, and he knew that ACME wouldn't approve of a change in plans. Too many variables. Perhaps Carrie's fate had already been sealed.
"Thank you for your time," Jake said the door shut behind him. As Jake started towards the pitying street, he heard the door open behind him.
"How do I win a trial that I have prepared to lose?" A smile plastered itself to Jake's face. Trying not to act too excited, Jake hurried back to the house.
Jake opened his briefcase and out poured documents, names, and telephone numbers. "This is a list of doctors to evaluate Carrie," he said. "These are papers about genetics," Jake jabbed at a stack of papers. "There is no evidence to suggest that at feeble-mindedness is genetic."
"Where did you get all this?" Irving gestured to the papers bursting out of the briefcase.
"I've been following this case for quite a while. You and Priddy haven't been as careful as you think."
"And the money?"
"Five thousand now, five thousand on October 19, 1927, if you win." October 19, 1927 would be the day when it would all be over.
"Three years!" Irving's neck fat bulged out of his too tight collar. "How do I know you're not bluffing?"
"The money is currently in a bank. It will become your money if you win. I will not touch it, unless you lose. Or don't comply." Jake opened another compartment in the briefcase. "Five thousand," he said, pulling out a stack of money as crisp as his suit from the compartment. "Count it if you want." Irving thumbed through it.
"Is that all?" he asked. "My wife will be home soon."
"Yes. Do you understand the conditions of our agreement."
"Yes." A woman screamed outside. Jake and Irving rushed to the door. Jake's jaw
dropped.
"My wife!" Irving's wife was half swallowed by the time portal. The supposedly secret
portal. The portal Jake needed to get back to the future.
"It must have glitched," Jake thought as he sprinted toward her. He tried to pull her out of
the portal, but it sucked them both in.
Jake lay on top of Irving's wife in a gray room back in 2014. He stood up and brushed
himself off. Relieved to see Irving's wife unconscious, he walked out of the room to survey the damage.
"Nice fail bro," said a scientist with long surfer hair and ray-bans. Jake looked around. Every scientist was the same. Every detail was the same. The muted CNN played the same news stories. Screens around the room played every detail of Jake's mission.
"Um, why isn't the world different? I made a major error."
"Irving tried to report how his wife disappeared. Everyone thought he was crazy, so they kicked him off the case and put him into an institution. Priddy corrupted the next lawyer and the rest is history."
"But the wife?"
3
"She barely went out of the house anyway. Turns out, she died three days later in a nearby lake after going for a walk. Not the sharpest tack in the box, which is probably the reason she walked into a portal anyway. Her body was never recovered. We won't see the effects of your change for a thousand years, maybe more. But dude, some of the other scientists are pissed!"
"How do you know what would have happened to her?"
"It's written about in our books." He gestured towards a cabinet. "The content of the books can't be changed."
"What will happen to her?"
"The same thing that must happen to you. You know protocol, don't you? In the event of a major mistake, all involved parties must be removed."
"Yeah, I know I'm fired."
"Jake Mayfield, report to management," the P.A sounded. Jake had barely started out of the room when six men with guns walked in. A shot was fired. A few seconds later, another shot was fired. 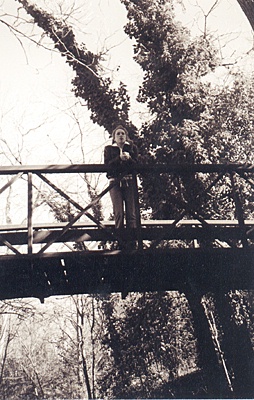 The author's comments:
This piece is about eugenics in the 1920's.
Post a comment
Submit your own

View profile
Wow, this is great! I loved the detail you put into the house Jake walked in, and the ending was awesome! Amazing job!     Could you give me some feedback on my story?  TeenInk.com/fiction/thriller_mystery/article/686391/The-Dreams-that-Keep-Gettign-Darker/