It was a normal Tuesday night. The bright blue sky fading to pink and orange as the sun started to set over the horizon. Only a few cotton-candies like clouds danced across the sky. It was always great seeing a different view of the sky every night. Amber shoved pillows under the covers of her bed so it appeared she was still there, shut off her light and crept downstairs making sure not to wake anyone. Lucky for her the door alarm was on, her parents never thought it necessary to leave the alarm on. The second the door shut behind her Amber felt the cool autumn breeze on her warm skin. Her brown hair with the purple streak in it blew in the wind. She walked quietly down the street, as she did most nights. The only thing different about tonight was that Amber was finally going to show her secret night life, the world she hid in, to someone else, she has kept it a secret for eight whole years. She got to the bottom of the street and met her boyfriend, Metro, at the small cleft about three minutes into the woods. He showed the place to her one day and now they go there on regular bases. "Hey" Amber said sitting next to Metro overseeing the view of the dark forest. "Hey" Metro replied kissing her. "Ready to go?" Amber asked, forcing herself not to back out of the decision to let her secret world be seen. "Yea, let’s go." He replied. Amber and Metro walked together through the woods, past the tree that had their names carved into it, past the fence that said "Keep out Violators will be persecuted" and through the small river that no one ever crossed. There was a part of the woods that seemed impossible to get through; vines everywhere, trees probably hundreds of years old marked the path and the sound of wolves howling to the white full moon. Amber put her hand on a tree, the tree had a mark on it, and it looked like a "W" with a "3" around it. The symbol started to glow and the trees and vines split in half and opened. “What the?!” Metro exclaimed seeing the trees opening and sparkling. “Welcome to my secret world” Amber said. As the two walked in the trees closed behind. The place was beautiful. There was an ocean on one side and a way to the woods on the other. There was ducks swimming in the crystal clear waters of the ocean. The sky was now a dark blue with sparkling specks, also known as stars, in the sky. Amber brought Metro down to the beach where they sat on a rock overseeing the great blue water. Metro had his arm around Amber and Amber lay her head on Metros shoulder, they looked up into the deep blue sky and saw a shooting star passing by the romantic view. “Make a wish” Amber said, “I wish tonight never had to end” Metro said, “I wish the same” Amber replied. The night never did end. The two are still in the secret world happier than any person could be in the world of reality. They were happily trapped in a world of dream’s and happiness. 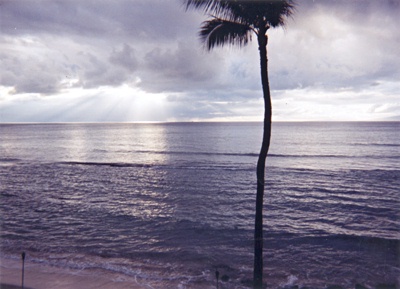 View profile
Fiction
Her Everything
By Anonymous