Living in fear, it was what I had done since the day I was manufactured. I, Perry the Platypus was running for my life, terrified of being smashed by the kid next door. A woman had purchased me from the dollar store, although I do not know why I was only worth a dollar, and a birthday party was about to go horribly wrong...for me. I needed to find an escape.

I spotted a dog door. Left in the bag on the counter I had my escape route planned. I toppled over the bag and landed swiftly onto the ground. The dog heard me. Why oh why did it have to be a rottweiler? My teeth started clicking in nervousness. I had nothing else to do but whip out my slingshot and start slinging pebbles into his eyes, temporarily blinding him. It's a good thing I always kept my handy dandy slingshot and pebbles with me or else I don't know what would have happened. The rottweiler yelped and the humans were coming. I ran with all of the force I had left in my legs to get out the dog door. I was safe... for now.

In the garage I saw something wonderful, a new and undiscovered way of travel for my kind. It was yellow and it seemed to be glowing. It was apparently called a remote control helicopter, or so it said on the side in red lettering. I hopped in with excitement and grabbed the controls. I flew with the birds to my next destination. With this new freedom I found I knew that us Platypi were missing out on a life of adventure and I needed to rescue them, but I was starving. If I was going to have any success I couldn't do it on an empty stomach. Destination, Fire Mountain.

Fire Mountain was a buffet filled with unending amounts of pudding, which I was craving. The hostess at the front desk apparently did not allow Platypi in her restaurant so I had to devise another plan. The plan was to sneak through the kitchen door as the waiter walked out and it proved successful. Perfect, the pudding was just sitting on the counter. I couldn't find a spoon so I decided to just start shoving my face in the pudding, swallowing fast and ferociously. It was sweet and sensational chocolatey goodness that soothed my throat as I swallowed, still trying to hurry. I was a bit of an untidy eater so I guess when the waitress saw me that's why she screamed. She took the broom and started beating me with it. Luckily I didn't burst open. I scurried out of there fleetly. I was full anyways, I was satisfied because I was packed with pudding.

Back to my mission, free the Platypi. As I walked back to the dumpsters, where I parked my helicopter, I saw that it was no where to be found. I heard a zooming noise in my ear and realized that another creature was flying my helicopter! It was that devious chipmunk! It was my arch nemesis, Fredford. After witnessing this irking sight, I was now consumed with rage.

I once again had another distraction and forced myself to eliminate him. I drew out my slingshot and put the biggest pebble into it. If my aim was just right I could get him, and so I did. I sent the helicopter toppling downward headed for doom. It exploded as it hit the ground and the enemy was no more...or so I thought. With no helicopter I had to settle for the next best thing, the semi-truck left in the back parking lot. When I climbed up the truck I realized I couldn't reach the foot petal. Faced with this new dilemma I noticed a bowling ball on the passenger seat. Who knew truck drivers liked bowling? I pushed with all my might and eventually the ball rolled onto my seat. With one last push I rolled it off my seat and it hit the petal. As I turned the key, the truck sped to life and flew through the parking lot uncontrollably. As I made it onto the road I was speeding uncontrollably and was gaining speed quickly. There was no way to remove that bowling ball anymore, now all there was to do was hold on tight, steer away from trees and other traffic, and hope I made it out of this alive. I'll admit that this was not one of my best ideas. Oh no, I suddenly impinged on a pedestrian! I hoped she wouldn't sue.

I made it back to the dollar store and freed the other pinatas easily, sneaking them out the air vent in the supply closet, but something is wrong. Patty was missing. The agony I was feeling was indescribable and unbearable. I let out a loud cackle with my teeth. I needed to get back to her. She was my beloved and I had come back for her, the only other of my kind. She was the only other Platypus pinata! What would I do without her? As I got back into the truck there was something new on the passenger seat. It was a note, not ordinarily written, but instead in cutout letters. It was a ransom note. It read, “If you want to find your lover we have her. Bring us one hundred dollars.” If I hadn't noticed that the paper said Chuck E. Cheese on the paper I would have had no idea where to look. One hundred dollars, I could do that. So I robbed the nearest hoodlum on a Harley without him noticing as he combed his mustache in his side mirror. I took the whole wallet and it turned out he had twenty bucks to spare. When I arrived at Chuck E. Cheese's I got snatched up by none other than my nemesis Fredford. The thieving chipmunk was back. I thought I killed him? Boy was he ever persistent. He snatched me up and shoved me in “Whack-a-Mole” where he tried to hit me but I, being the sly one I am, escaped and put him in there and mashed his head over and over again. He got mad and ran to laser tag where I followed him because I had to terminate the enemy. We ended up having an epic, James Bond-like laser tag battle. After we got thrown out of there for being too violent, I hopped in a go-kart in an effort to get away from him. Before I knew it we were in a high speed car chase! Thrilling yet terrifying I spun him out and he crashes...badly. His go-kart has a malfunction and blows up as it spins out of control without stopping. After the explosion something rolled on the ground, stopping at my feet. It was Fredford's detached head! I knew for sure he had been eliminated.

I knew time was running out and as I walked by a game I heard a cry for help. Sitting in the machine called “The Claw” was none other than the ravishing Patty herself surrounded by a bunch of small alien toys. The first thing I heard when I stuck my head in the hole to climb up and save her was a simultaneous, “We are eternally grateful. You shall be made our new queen.” They had wheezy voices and were extremely irritating. Climbing up the tube was a challenge but even more so was getting out. Even after I paid them the one hundred dollars the aliens refused to let her come with me despite her desire to get out of there. They chanted, “You must stay with us. You are our queen!” They started pulling me downward. I didn't like the texture of their green skin. but I slithered and fought my way out of it, carrying Patty in my arms as they all stared in awe with each of their three eyes staring at us. Finally, safety, I thought... but then a kid came.

Once he saw me he charged me with what looked like a stick, a pointy stick. It was an evil tool for a game of billiards so fun. I told Patty to run. As she ran for her life the kid whacked and beat me and held me with his foot so I couldn't move. I tried to fight but I couldn't get my slingshot. I tried to get away but I knew my life was coming to an end. I felt time running out. There was nothing I could do. Within minutes later I was surrounded by what once filled my stomach; I was lying in a puddle of pudding. I was beyond repair and I heard cries and felt the sorrows coming from Patty. The last thing I did was hope she was safe. 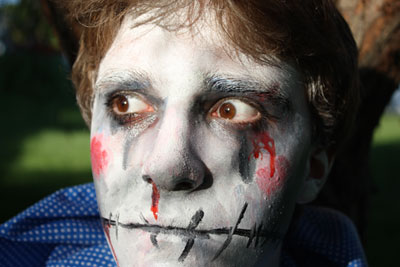 The author's comments:
This piece I did for my creative writing class and at first I was stressing over what to write about it and then I decided to do something I'd never done before. Non-realistic fiction. It's a comical piece that I honestly had fun writing. Hope You enjoy it! (: Oh yeah, the picture=humans are scary! especailly kids! ...read my story and you'll find out why!!! (:
Post a comment
Submit your own