The day it happened, I was an innocent fourth-grader. No matter how many times I’d practiced in front of my family, I was still nervous and could not get those butterflies out of my stomach. I went to bed thinking of excuses to avoid standing in front of the class. Maybe I could pretend to be sick? No, I would still be forced to do the presentation later. I had horrible nightmares of everything going wrong and, worst of all, the class laughing.

Unfortunately my presentation went just as I had imagined. I unintentionally found every possible way to encourage the class to pick on me, beginning with forgetting what to say, looking down at my paper, and ending with my face flaring up like fireworks on the Fourth of July. It was not forgetting my lines that bothered me because everyone did that, but the fact that my face was like a flashing red light, telling everyone I was embarrassed.

That day I heard so many comments it is hard to remember them all. Some were out of meanness and others from concern, but the remarks that ticked me off the most were the purely stupid ones. The naughty kids, so to speak, were those who made the mean remarks like “Her face is as red as a tomato” or “Oh my gosh, watch out! She’s going to blow up.” The concerned remarks were mostly “Is she okay?” Some people actually came up to me afterwards and asked “Why did you turn so red?” or “Do you know how red you got?” as if I had not known that my face was burning. I felt like yelling at them, “I know I was red, it’s only my own face. What, you think that I cannot feel it?” I just wanted to go crawl into a deep, dark hole and never come out.

Through elementary school I was picked on because I was known as the girl whose cheeks flared up like ripe red tomatoes if I were embarrassed. Whenever the teacher called on me when I did not know the answer or when I had to go up in front of the class, my cheeks would burn bright red. I hated it. What I hated even more was that when people made fun of me because I was red, my face got even redder.

It did not get any better as I got older. I thought it would go away, like a problem I would outgrow, but it did not. Every day in middle school I heard something new. When we were running the mile, someone would say, “Oh, my gosh, you are so red. Are you okay?” I wanted to scream “I’m fine!”

I remember being so upset that day in fourth grade that I told my mom everything. She said she had faced the same problem when she was a child and told me that I was lucky since I would never have to wear blush. The color in my cheeks only made me more beautiful. Of course, this did not help me in the big picture because, no matter what, nothing could prevent me from turning red. I have learned that it is something I cannot control. It is ironic because I am not necessarily shy, just ask my friends.

Come to think of it, there is one advantage of turning red - faking a fever. I don’t do this anymore, but whenever I wanted to go home, whether it was a headache or something else, I would make myself turn red. This actually worked a couple of times because the nurse would feel my forehead (which was burning up), and suddenly I had a ticket out of school.

I still get red whenever I am embarrassed and although it doesn’t happen all the time like in elementary and middle school (and I like to think that it is because people in high school are more mature), there is still the occasional jerk who makes some remark. It definitely does not bother me like it used to because I have learned to accept it. My flushed cheeks are a part of who I am. There will always be people who love to dent another’s self-esteem and the tricky part is not letting that person get to you. Accepting who you are may be the most important part of getting through life.

Frankly, I would rather choose a vibrant red tomato out of a bunch of dull red tomatoes. Call me the vibrantly red tomato. 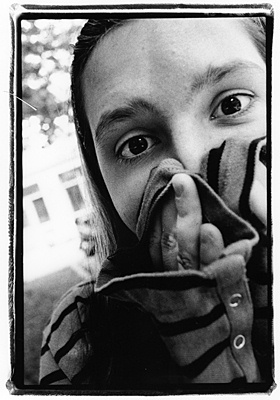 View profile
So nice! I love the message behind your story :)