Last summer, Brand New, a small-time band hailing from Merrick, New York, released "Deja Entendu" as the highly anticipated follow-up to their debut, "Your Favorite Weapon." "Deja Entendu" (which means "already heard" in French) is something of an ironic title. The style is completely different from the catchy pop-punk sounds of "Your Favorite Weapon." "Deja" includes deeper, more meaningful lyrics sung to more melodic, acoustic guitars. Earlier fans might be quick to criticize, saying Brand New has gotten mellower, but I think their sound has matured, and that they have grown as a band. In any case, there are still those cutting chorus-lines that almost inevitably break in at the perfect moment.

What really sold me on this record was the fact that the songs are not just the typical story of a guy meeting a girl and falling in love. Jesse Lacey, lead singer, really puts his heart on the line as he writes about his real-life experiences. In "I Will Play My Game Beneath the Spin Light," he uses metaphors to describe his tiredness of being on tour, saying, "Every minute is a mile, I've never felt so hollow. I'm an old abandoned church with broken pews and empty aisles."

In "Jaws Theme Swimming," the line "Some rules are made with all intentions to break and she defends it with a warped rationale" is sung along with a rolling bass line.

The album ends with a brilliant finale. "Play Crack the Sky" is a vivid tale of two lovers who drown together at sea. It's a mellow acoustic song with not much more than a guitar line and Jesse's vocals, but it is deeply felt by the listener because of its lyrical intensity. This is definitely the perfect song to finish off such an amazing album.

Complete with signature guitar lines, complex drumbeats, and distinguished lyrics, this is most certainly an album for those who appreciate genuinely good music. Providing ear candy for the listener, the album is heartfelt and pure, and Brand New is beginning to gain international recognition. Not bad for a band that pretty much had only a local fan base two years ago! I commend them for all they've accomplished, and I love this record. There is certainly nothing about "Deja Entendu" that we've "already heard." 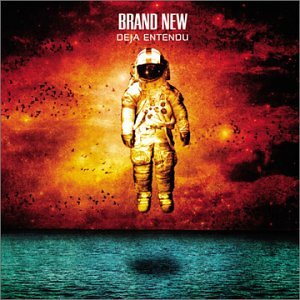