Double Nickels on the Dime by The Minutemen | Teen Ink

Double Nickels on the Dime by The Minutemen

When I think of the Minutemen, I think of LCD Soundsystem’s 2002 song “Losing My Edge.” In “Edge,” singer James Murphy talks about a “borrowed nostalgia for the unremembered 80’s.” This line always struck me as intriguing, but then I discovered the Minutemen’s Double Nickels on the Dime, and it finally sunk in. It was here that I finally garnered my “borrowed nostalgia.” The Reagan years, institutionalized racism, corporate greed, excess and working class anxiety: the sprawling 44 song, two disc album covers everything so accurately and so well that the listener is immersed in the fabric of time. Even with all its flaws, I can still say that Double Nickels is my favorite album of all time.

D. Boon, Mike Watt and George Hurley—guitarist/singer, bassist and drummer, respectively—intend to take the listener on a journey; the first sounds are that of a rusty manual engine, gradually making way for a soft bass line. The raw energy of the opening guitar chords on “Anxious Mo-Fo” is balanced by a fluid and spastic bass, each pop and pick of the thick strings accentuated by the kick and snare of Hurley’s drums. The album is a natural, mutating organism with a mind of its own. The disco-like grooves and pulsating hi-hat beat of “Viet Nam” make way for a sultry guitar of “Cohesion.” This album provides a diverse collection of musical noise. Though the progression of songs is not necessarily contiguous in the album, which is split up into the four sides—D., Mike, George and Chaff, respectively—the variation of styles ultimately breathes life into the music, making an animate work of art.
Of all the variation throughout the album, Mike Watt is clearly the most consistently stand out player. The bass is already an intimidating instrument, its strings are large and its sound is immense. Given the funk leanings of this record, it’s no surprise that Watt is the most powerful player. “June 16th” is a great example of how much chops he really has. There’s no other way to describe his playing besides ‘just right.’ The natural decay of the long notes blends perfectly with the somber melody.
The highlight of the album has to be “This Ain’t No Picnic,” a tale of workaday angst. The music video is especially intriguing. Set in what is presumably a destructed factory. The three men rise from the rubble and start playing, only to see fire bombs trickle down from one of Ronald Reagan’s fighter planes. Boon sings about the angst of work: I’ll waste my youth away/In the place of a machine. The whole song is critical of work and the American economy, and the music itself is just as abrasive. Hurley’s drums are crisp and hard, Boon’s guitar sounds like it strummed with sandpaper. Though sonically unfriendly, the intensity of the band keeps the listener engaged.
Other parts of the record are just a joy to hear. “History Lesson Part II” is a softer song about the group’s early years. D. Boon makes his guitar whine, as if it was yearning for more the innocent and youthful days of their music.
There are, however, many low points in the album. While some may call their foray into free jazz in songs such as “You Need the Glory” challenging, it’s nothing more than self-indulgent chaff. Though, “Glory” is an exception to an otherwise tight record; afterwards a string of 19 solid songs continue. Like the rest of the album, the section varies, but the songs begin to slow in pace and lower in volume. Songs of aggression make way to songs of dull pain; the Minutemen are tired from their long journey. But, by the end, they breathe a second wind. “The World According to Nouns” begins with a dissonant bass riff, exploding to a melancholy and destructive rhythm that keeps the listener at edge. The song slowly decays and leads into the next one. No more voice, just a tropical jam. “Love Dance” is a great ending to the album; it creates a conclusion that is both eerie and satisfying, leading finally to a car rumbling away in the distance.

This album, though, is more than just the sum of its chords, riffs and fills. To me this is the most “punk” a record could ever be. The Minutemen were not austere in their style, they were influenced by funk, jazz, Latin, all kinds of music. Their music was more than just atonal progressions stacked with layers of lazy distortion. I had first heard of the Minutemen while working my way through other classic hardcore punk—Bad Brains, Black Flag, Minor Threat—I loved it. The brutality, the honesty, the aggression; it was an anger so pure that to a high school freshman it is the only real noise ever made, it was my music. Though, after many repeated listens and discussion, I found these bands to be too simple. I still love and listen to them to this day, but they don’t take me to another place like they used to. The Minutemen, on the other hand, are different. They approached punk not from a musical stance, from a social, political and mental one. They were the ones being truly rebellious, truly inflammatory, and truly dangerous. All the real anger that these young men were feeling, their dissatisfaction with life, their impatience, their disdain for the world around them is so eloquently expressed that it’s more than just hardcore punk. I can listen to this record and feel Boon, Watt and Hurley on a more personal level, I know them and they know me. They hate their work place as much as I hate high school; they’re sexually frustrated, bored, and resent the norm. But their voice was flexible, more complex, more real. It’s so convincing that it gave me a little bit of borrowed nostalgia for a time that never existed for me. Listening to the album, long past midnight, headphones on full blast, I’m right there with them. This is why Double Nickels on the Dime is a timeless piece of art the greatest album I’ve ever heard. 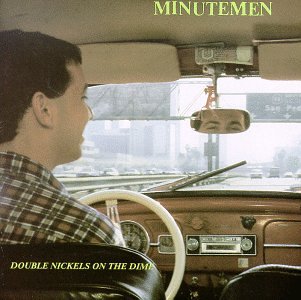 
Buy from Amazon Available on iTunes
The author's comments:
Most people here probably have never heard of the Minutemen, much less Double Nickels on the Dime. Regardless I thought that this would be a great opportunity to show with my fellow teenagers a record that has and continues to give me new insights on the world as I travel this road of adolescence.
Post a comment
Submit your own