Favorite Quote:
"And then we continued blissfully into this small, but perfect piece of our forever...." -Bella Cullen- Breaking Dawn.
"Gandhi said that whatever you do in life will be insignificant. But it's very important that you do it."
“Everyone’s stars, don’t get your hopes up, learn the ropes and climb the ladder and know in the end, that just being here is the best and it only gets better.”


This album is the first album released by this up and coming Disney Channel Star. Demi Lovato. A little information on Demi Lovato: Demi started out on Barney, when she was seven, meeting one of her best friends, Selena Gomez (Wizards of Waverly Place). Then years later when she got on Disney, she started out on a short commercial show called, “As the Bell Rings”. She later got the starring role in a Disney Channel Original Movie, “Camp Rock”. Then her first album came out. Because of her popularity she got her own show, “Sonny With A Chance”. A comedy show about a comedy show. Selena Gomez and Demi Lovato were signed on to another Disney Channel Original Movie, “Princess Protection Program”. Then her second album was released. But lets back up to her first album….
Her first album was not titled by her name, like most stars have their first album. It was titled by one of her songs, “Don’t Forget”. “Don’t Forget” is a pop album with songs either written fully by Demi or by her and the Jonas Brothers. The songs are mostly: make-up, break-up, or get together songs, except for a few. The first song to be released as a hit single was, “Get Back”. Later when that fell out of the spotlight two others came around to be popular singles, “La La Land” and “Don’t Forget”. Those three were made into videos. “Don’t Forget” being the saddest of them all. It was really good, but it was sad. Singer, Taylor Swift, said it was really good and made her cry.

Demi Lovato is one of the few Disney Stars that have a good singing voice. The others include: Mitchel Musso, Selena Gomez, Ashley Tisdale, and Zac Efron.


I enjoyed her CD. I give it an nine out of ten. 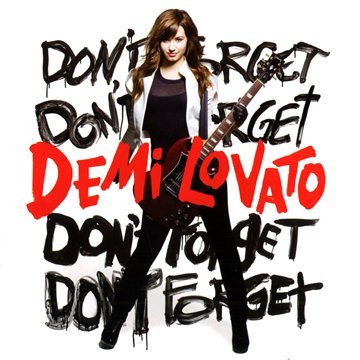 View profile
I hate demi of any other disney stars the only reason they have a music career is because of their corny stupid shows.