Well, let me tell you that I read the Hunger Games series before it was cool. I know, I know, all the kids are saying that but for real I did. Honest I did. In fact, I remember getting the third and final book, Mockingjay, for Christmas one year in the 7th grade. And while critics and the common folk alike continuously lambasted Mockingjay as the worst in the series, I thought it wasn’t half bad. However, upon seeing Francis Lawrence’s The Hunger Games: Mockingjay – Part 1 I’d have to say that this was by far the worst film out of the bunch.


Now that’s not to say that it was bad. In fact I had quite an enjoyable time watching this movie (though maybe it’s the 50 foot screen and plush leather armchair talking). However, the consistent tradeoff of politicking for action, and especially action that has been so central to the franchise from Day 1, could not help but be missed, and thus hurt the film’s overall cohesiveness.


It starts with our protagonist, Katniss Everdeen (Jennifer Lawrence), waking from a coma-like haze, wandering in on fellow Victor Finnick Odair (Sam Claflin) speaking rapidly about how the Capitol has taken their loved ones, namely Katniss’ Peeta (Josh Hutcherson) and Finnick’s Annie Cretsa (Stef Dawson). Katniss is then led to see the President of District 13 (where she and the other Victors from the 75th Hunger Games have been rescued) Alma Coin (Julianne Moore). Former Head Gamemaker Pultarch Heavensbee (Philip Seymour Hoffman) is there too. They tell Katniss that they need her to be a symbol of the rebellion that has now risen up in several districts in Panem, rebellion that District 13 is sponsoring. Disgusted at the fact however that Peeta was not also saved, Katniss refuses. It takes subsequent persuasion from Katniss’ sister Prim (Willow Shields) and a past friend from District 12, Gale Hawthorne (Liam Hemsworth) before Katniss agrees to be a part of District 13’s propaganda and become the symbol of the rebellion. However, using Katniss effectively in over-the-air patriotic broadcasts proves tougher than expected, and as a result Katniss ventures into the field once or twice in order to capture authentic moments of her among the people.


As I stated before, while there are some good action scenes, by and large this movie is meetings, talks, and political moves and countermoves. While the director makes a great amount of suspense from what mostly amounts to fluff, I could not help but feel that this installment of The Hunger Games lacked a certain kind of raw, emotional, and physical edge that the other movies possessed. Aside from the one sequence in which Katniss shoots down a futuristic air carrier with a bow and arrow on steroids (the same scene that’s been heavily publicized in the movie’s trailer) this film lacked any true action. That action which did partially exist did so by proxy, with the audience stuck in District 13, receiving information at the same slow rate that Katniss does.


Overall, while this flick probably doesn’t even touch my top 40 favorite movies, it is still a worthwhile film, even if it is only seen for continuity’s sake. Strong performances provided by Jennifer Lawrence, Hutcherson, and Hemsworth lead to this film being good, but not quite meeting the already storied franchise’s high expectations. 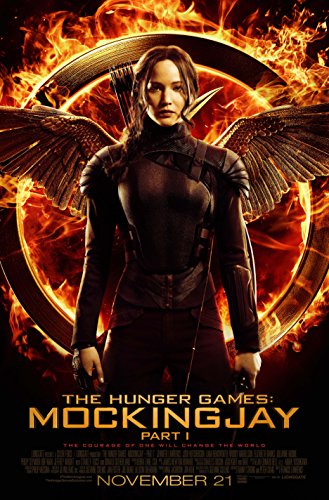 Enjoy the review and hopefully enjoy the movie too!