Spoiler alert: This movie was awesome. I don’t say that as a gimmick, I assure you, I say it because it’s true. When I first saw ads for Edge of Tomorrow, I will admit that I was not terribly jived. I mean amongst movies like X-Men: Days of Future Past, Godzilla, and Maleficent this little known Tom Cruise flick looked more like white noise than any kind of substance. I assure you, this movie has substance ten times over.

It begins with a montage (I know what you’re thinking, but bear with me) of an asteroid striking Germany and the subsequent unrest following the event. Eventually, aliens from the asteroid known as Mimics begin to spread like a disease across the European continent, seemingly unstoppable. All of humanity’s greatest military strength is now concentrated into one unit, the United Defense Force, under the control of General Brigham (Brendan Gleeson).

The General has come up with what he thinks is an ingenious offensive that will rid Earth of the Mimics. In D-Day-esque fashion, troops will launch from Great Britain and land on north French beaches in an attempt to gain a foothold against the Mimics. Though there is some skepticism from the public over this plan, an expert media relations officer, Major William Cage (Tom Cruise), assures them that everything will go fine.

General Brigham calls a special meeting with Major Cage. Brigham orders Cage to join the troops on the beach and help film and report on the invasion when the first wave hits. Cage, however, is worried he’ll get caught in the crossfire and as such refuses the General’s orders. Cage even goes as far as to black mail the General by saying he’ll convince the media that it’s Brigham’s fault if the invasion fails. Brigham, however, is a no nonsense kind of guy, and thus orders Major Cage arrested for bucking his authority. As Cage goes to run he is tased by a security guard and passes out.

When Cage awakes he finds himself at Heathrow Airport in London along with the advance troops that are preparing to invade the European mainland the next day. It turns out that Brigham has blacklisted Cage, branding him as a deserter and assigning him to fight alongside the first wave of troops. Cage attempts to tell another officer, Master Sergeant Farell (Bill Paxton), that there’s been a mistake, but Farell is adamant and the next day Cage ships out.

The invasion turns out to be a bust for the humans, and Cage dies while fighting a large Mimic. However, after he’s been doused in the Mimic’s acidic blood, he wakes up at the beginning of the day back at Heathrow. It doesn’t take him long to figure out that he’s now stuck in a time loop and that every time he dies he wakes up back at the airport.

Astounded at this newfound ability, Cage comes across another soldier on the beach, the war hero Rita Vertaski (Emily Blunt), who recognizes Cage’s ability to reset the day and tells him to find her “when he wakes up”. Cage quickly comes to realize Vertaski had this ability at one point too, but lost it after receiving a blood transfusion for injuries sustained on the battlefield. She tells him that the Mimic he killed was a special kind, a leader that they call Alphas. Because Cage got the Alpha’s blood on him when he died, some of the alien blood transferred to his system and he now has the ability to reset the day when he dies (assuming he doesn’t also receive a blood transfusion like Vertaski). Also, he will begin to receive visions of a large floating orb and its location. Vertaski calls it the Omega. The Omega supposedly acts like a hive mind for all the Mimics, and if Vertaski and Cage can kill it, they’ll disable all of the Mimics and end the war. By dieing and then trying again, Cage begins to map out how to get off the French beach so that they can go and find the Omega. However, not all things are as they seem, and Cage will face adversity from both sides before the day is over.

Now, while some of this may seem cliché (time travel, alien invasion, etc.) the twist of Cage coming back to life everyday and thus slowly getting better at killing the Mimics is a rather interesting one. It also provides for an interesting dynamic between the characters, as Cage already knows a lot of what’s going to happen, while everyone else has no clue. This can lead to some humorous moments that contrast the militaristic overtones of the film.

I also have to tip my hat to Cruise in this. He is no stranger to sci-fi movies, but usually he’ll play a super serious, single-minded, no nonsense kind of guy, and seem to know exactly what is going on. Here he translates the fear Cage feels the first time he goes into battle effortlessly, he accurately portrays the confusion that the Major experiences when he first resets the day, and he makes us like the guy, evolving flawlessly from that cowardly and unpleasant Cage that tries to black mail a superior officer into a guy that is fighting for the survival of his species. In short, Tom Cruise gives a very nearly perfect performance and the film benefits greatly from it.

In the end I would strongly suggest going to see this movie. It is a great addition to the genre, and is worth definitely more than just a passing glance. 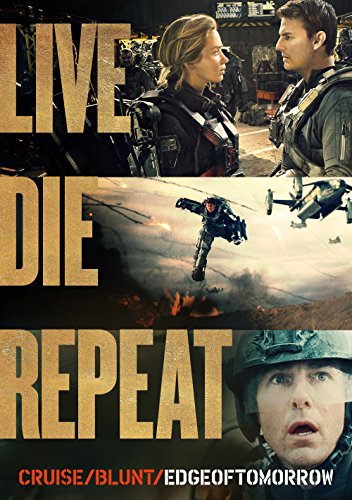 I really did enjoy this movie from beginning to end. If you like a good sci-fi flick, go see it!