This movie includes famous people from two worlds. One is retired Hall of Famer Michael Jordan. Here's a clue that might help you guess who the other main character is: “What's up, Doc?”

This thrilling movie begins with a young Michael Jordan dreaming of becoming a pro basketball player. Later, he pursues his dream and at the same time follows another passion: playing baseball. ­Because he is a Hall of Fame ­basketball player, he is welcomed into the baseball community. Jordan is also an excellent golfer. While golfing, MJ is kidnapped by the Looney Tunes, who need his help. This is funny because of the intense battle of MJ and the Looney Tunes versus the Nerdlucks.

The battle may seem like David and Goliath, only who's David? Watch and prepare to be shocked.

Three aspects of this movie are great. The story is filmed both as an animation and live-action, so it is enjoyable for all ages. It is produced perfectly. It never feels like you are watching two separate movies. It is very cool to view the cartoon characters in our world and at the same time see MJ in an ­animated one.

Another reason “Space Jam” works so well is that it combines sports and cartoons. For instance, Jordan extends his arm 30 feet to the basket with the enlarged Nerdlucks holding him down. Exciting scenes on the basketball court add a touch of reality to the movie.

The third aspect that adds to its success is its appeal to all ages. With kid humor and adult dialogue, “Space Jam” became an instant success. Other famous actors appear in guest spots.

“Space Jam” earns high marks because of its technical greatness. I am convinced that kids will love it and adults will find the Daffy Duck in them as well. 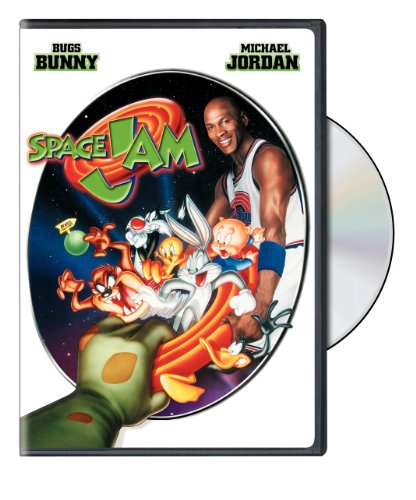 View profile
Okay I love this movie! I actually watched this is elementary school when it was raining outside. This movie put a smile on my face. Your review of it is genius. If I haven't seen this movie your sure would have made me want to watch it. Thank You!
Wolfen said...
on Aug. 11 2010 at 7:29 am
Wolfen, Prineville, Oregon
0 articles 0 photos 19 comments
View profile
Two of my favriot things MJ and loony tunes!
AnonyMOUSE BRONZE said...
on Apr. 30 2010 at 11:29 am
AnonyMOUSE BRONZE, Canon City, Colorado
1 article 5 photos 27 comments
View profile
I love this movie! I used to watch it everyday when I was little. lol
GreenDayFan SILVER said...
on Jun. 29 2009 at 5:17 pm
GreenDayFan SILVER, Phoenix, Arizona
7 articles 3 photos 134 comments

Favorite Quote:
"Put a piece on the floor, for your dead homies" -Derek C.

View profile
Michael Jordan was good for a first timer and Bill Murray is legit
Xavier Stampley said...
on Apr. 24 2009 at 6:11 pm
Xavier Stampley, Fisherville, Kentucky
0 articles 0 photos 9 comments
View profile
i<3 this movie its relli good nd mj is a beast
MaximumRideGirl'12 said...
on Apr. 7 2009 at 1:33 am
I have always loved this movie!!! It was so good the first time that I watched it and I'm a soon to be sophomore in high school and I will still watch it. It is funny for all ages!!