I've always been a sucker for animal movies, especially when they're made well. Steven Spielberg's “War Horse” – an amazing historical epic – is easily one of the best films this year.

“War Horse” begins with a poor, hard-working family right before World War I. The father (Peter Mullan) buys a horse at a local auction while trying to outbid his greedy landlord. His wife (Emily Watson) is furious and decides that their son, Albert (Jeremy Irvine), must train the horse to plow the field. But, as the war draws near, the ­father sells the animal in a last-ditch attempt to save the farm. The rest of the film follows Joey the horse and his trek across Europe as he endures the grueling war.

The first 45 minutes of the film show the beauty of Europe before the war. There are landscapes of green mountains, an ever-present duck for comic relief, and the growing love between the boy and his horse. Although the family struggles, the film remains light. It's somewhat like a mixture of “Babe” and “Seabiscuit,” satisfying and enjoyable.

The characters are unique as well. The father is an honorable man who loves his family. The trash-talking landlord is witty but cruel. And the hardworking mother makes you want to stand up and shout “You go girl!” But sadly, everything changes when the war begins.

The movie quickly grows bleak and grisly. Joey the horse meets various people who are affected by the war. Though each situation is different, the characters are united by their struggles. One story follows a soldier rescuing his brother from certain death. Another shows a girl and her grandfather's discovery of the horse. Each is a tragic miniature tearjerker.

The climax occurs in the trenches during the Second Battle of the Somme. The film depicts this carefully. There is toxic gas, rats in the trenches, and a no man's land surrounded by barbed wire. I ­really appreciated the meticulous detail. In one scene – probably the best in the film – Joey is caught in barbed wire on the battlefield during a short cease-fire. A British soldier and a German soldier work together to free him. The soldiers approach the war with a sense of humor, yet there's an earnest honesty in their eyes. They joke around, knowing that they will again have to shoot at each other in a matter of minutes. It's like the Christmas truce – but sadder.

As I mentioned, I'm a sucker for animal movies. I love the relationships Joey has with various characters. Joey and Albert's friendship is especially sweet. The finale is hugely satisfying and crowd-pleasing. I'll admit that I cried like a baby. John Williams' score is intrepid, allowing the emotions to run rampant. The final image of the film is bold and leaves the audience with a teary smile. 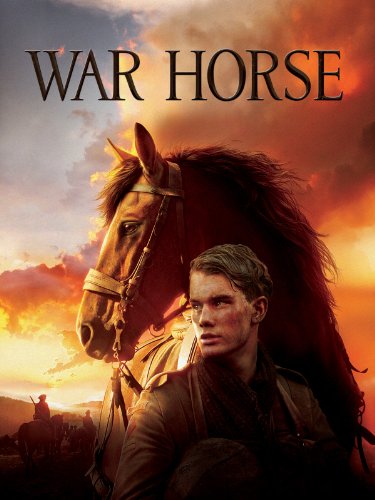 Favorite Quote:
Broken hearts and scars in only places she could see. She just wanted to feel something.

View profile
I loved this movie. I loved the part where the soldier who had joey at first, has some condition with his eyes but yet he was so attached to the horse he knew it was joey even though he couldnt see him.
Klammyt GOLD said...
on May. 1 2014 at 12:28 am
Klammyt GOLD, San Diego, California
17 articles 1 photo 47 comments

Favorite Quote:
"Remember you're braver than you believe, and stronger than you seem, and smarter than you think."
-Christopher Robin to Pooh

View profile
I saw this movie in theaters with my grandfather and we were both sobbing throughout the entire thing. Our eyes were so red that my mother asked us if we got into a giant arguement. :P
AlmostPublished GOLD said...
on Jul. 13 2012 at 8:17 pm
AlmostPublished GOLD, Phoenix, Arizona
11 articles 0 photos 29 comments

Favorite Quote:
Live for today,because yesterday is gone and tomarrow may never come.

View profile
I saw this movie on an airplane but It landed before I could see the end. I cried, that is saying a lot considering that I had been watching The Return of the King before that. Great article!
kevin said...
on Jul. 8 2012 at 10:37 am
i just watched this movie a few days ago,and i am really impressed by it ,especially the friengship betweeen the two horses
LongLazyDays55 BRONZE said...
on Jul. 7 2012 at 3:06 pm
LongLazyDays55 BRONZE, Other, Other
3 articles 0 photos 94 comments

View profile
I really want to go and see this! All my friends have seen it AND the show with the puppets! Must.....convince.....parents! Congrats on getting published in the magazine! Lovely review. Keep writing! :)
centerstage23 said...
on Jul. 1 2012 at 9:54 pm
centerstage23, Middletown, Delaware
0 articles 0 photos 4 comments