Pirates of the Caribbean 4: On Stranger Tides | Teen Ink

Pirates of the Caribbean 4: On Stranger Tides

Irony is at the climax of Pirates of the Caribbean 4: On Stranger Tides. As a whole, this movie is alright, its nothing special though.

Throughout the movie, England, Spain, and the pirates are on a search for the Fountain of Youth: A stereotypical quest for those greedy enough to tamper with eternal life. Spain, it turns out, just wants to destroy the fountain in the name of God; claiming that the fountain gives life only as God can. The cliched story of the fountain of youth is given a unique twist with the requirement of three items in order for the fountain to work; two silver chalices from the Ponce De Leon (shipwreck buried deep in the jungle), a mermaid's tear, and the victim whose years the recipient will be taking.

Two of the main characters; Will and Elizabeth(Orlando Bloom and Kiera Knightly), have ended their story with Jack (Johnny Depp) and are presumably living their lives peacefully. New characters are introduced, quite seamlessly, to take the place of Will and Elizabeth.

When it was said that mermaids were going to be in this movie, it was a unanimous cry of "oh, God" throughout my friends. Cries drawn from previous live-action movies including mermaids had every right to be apprehensive of Pirates 4, after seeing the movie, however, that was the highlight of the scenery, the actresses were gorgeous, and the tails were seamlessly integrated with the CGI underwater effects. the differences in these mermaids and other mermaids of legend were their biggest success. Mermaids that made men instantly in love and then dragged them down to the bottom of the sea and then feasted upon them with their mer-sisters. The half-woman beauties grew fangs and hissed when attacking or threatened, a fact that made me jump from the unexpected suddenness.

The plot was a victory up until the point when the Spanish came in and tried to destroy the Chalices and ruined the Fountain of Youth. It was as though the entire movie was useless. England only wanted the Fountain because Spain did, and the pirates are just greedy people who want to live forever.

To sum: Pirates of the Caribbean 4: On Stranger Tides, was good, it was not, however, award-worthy. It would be possible for someone to wait to rent it when it is released in a few months. 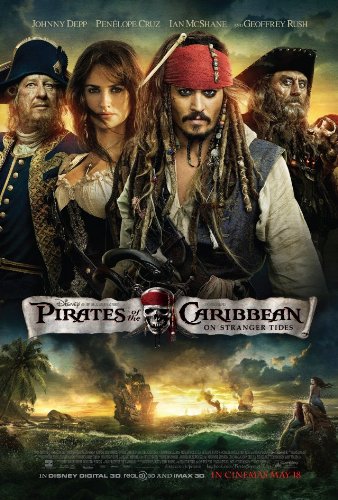