Seven Days of You by Cecilia Vinesse | Teen Ink

Seven Days of You by Cecilia Vinesse

Time has been something that has been created, yet destroying humanity as soon as the first second went by. We count our lives in hours, minutes, every passing second is a second you will never see again. A common phrase is people living their life waiting for a certain moment in time. When they grow up, when they get their licenses, when they graduate or move up in the work. All this time wishing the time would move faster, only to get to the end of life wishing time would slow down, that you would have a few more seconds, minutes with the ones you love. But all of those are just wishes. Time is content, each minute is sixty second weather you are having the best time of your life, or the worst. So keep those count down coming, as nothing you can wish for can slow down the powerful force of time.

Sophia had always felt lost in life. Living in Tokyo from her birth to age five, the moving back to New Jersey till she was thirteen. She was then supposed to move to Paris and live with her father, but after the birth of his and his new wife twins, her mother and father deemed the house too noisy for her, forcing Sophia to move back to Tokyo, as her mother gotten a research grant to live there for the next four years. There she enters grade seven at the Tokyo International Academy (shortened to T-Cad), and made best friends with Mika, David and nerdy little Jamie. It was there on the middle school playgrounds that Sophia fell in love. David, a spotlight seeking jerk, made it his personal mission to make Sophia laugh, capturing her heart in the process. Only he was not the only one pinning after Sophia’s heart. Jamie, who were leaving at the end of the school year for boarding school, was determined to break up Sophia’s affection for David. All of this happened three years ago, in those three years Sophia had not heard from Jamie once, and hoped to never hear from him again.

Sophia had seven days (actually six days, nineteen hours, four minutes and twenty-five seconds) before she boards a plane taking her from her home of Tokyo, back to the dull state of New Jersey. With that one week she was determined to spend every second with Mika and David, exploring the city she was about to leave. When Mika announce that Jamie was moving back, with Sophia fighting air wondering how she would spend her last seven days in Tokyo with Jamie there. “Mika and David were gone, and it was like I was losing air. I was losing gravity. I was already losing Tokyo, the light fading around me one at a time. Until I thought about Jamie –  my hand on his, the strange, familiar sound of his voice in my ear – and the lights flickered back to life”. This thrilling novel talk about spending the last week with those you love in the city you grew up in, fighting all those things that human feelings of being alone, losing yourself, and being in love.

Cecilia Vinesse wrote one stellar of a novel. For her debut novel, Vinesse starts us off at one amazing location: Tokyo. Here our American girl Sophia, who attends an American school here, explores the city with some knowable even though she’s does not speak that much Japanese. Relying on Mika you get to see a cultural side of Tokyo from the street venders they visit, karaoke is the hot new thing, to them laughing about in their local Starbucks. Like every other young adult novel, there was a bit of a love triangle in this. Sophia has been in love with David since she came back in seventh grade. Now four years later, her feelings have not changed. She watched him go from girlfriend to girlfriend, be the jerk that he is, leaving them in tears, but Sophia knows that’s not the real David. Her David is kind and thoughtful, he’s the one that makes her laugh, and make sure she feels included wherever they go. Even Mika (their other best friend) tells her to stop pining after David, that he not worth it, does not slow Sophia down a bit. Then came back Jamie, a guy who was just jealous that Sophia liked David and not him. He was a kid, but even in those three years away his feelings for Sophia did not change, and luckily neither did hers. “You were my first real best friend, of course I missed you. Every single day”.  Even though this book was about leaving the place and people you called home, she only had seven days, the part that blew me out of the waters was Sophia’s realization that David was not who she thought he was. That even though they were best friends there was a part of him that she glossed over or pretended that they did not exist. That “Her David” was not the real David, and it only took four years, and Jamie comes back to make her realize it. Her count down is counting with Sophia now only having six days eighteen hours, fifty-five minutes and thirty-two seconds before her world comes crashing down. 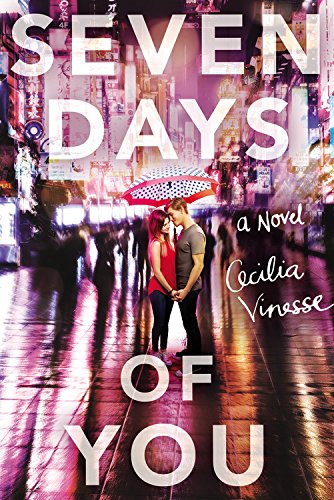 What would you do if you had a week to live, before moving to the other side of the world? Who would you kiss, break off, tell them you love them, how long would you sleep knowing the clock is ticking?