There has always been a tie to humans and horses, ever since humanity can remember.  From a means of transport, to farm labour, we even rode them into battles during wars. According to history, therapeutic benefits of horses were recognized around the 1870’s in Europe. The goal of these residential equine therapy program is not about riding your horse, but taking care of it, forming an unbreakable bond between you and him, until maybe both of you get better. That was the motto of Good Fences, one that Merritt did not take too kindly too.

Merritt Wenner goes to an all-girls private school called Chace. Chace is somewhere she did not fit in well, as the girls were all about showing off their ponies, boys and parties. Merritt only escapes when she visited her grandmother and her horse named Nobel. When her grandmother died in a car accident, something inside Merritt snapped. It was when Merritt skipped her SATs exam and had an all-night bender, which made her parents say enough is enough. They shipped her off to Good Fences, an residential equine therapy program, so that she can “get better”, but also so that they can totally ignore her, as they prefect their marathon running. Good Fences make Merritt face some things she ran away from, take a path that was never open for her before, and discover who she truly is.

Red was a beast. A gorgeous, powerful, beast. He was bred the perfect race horse. What none of the breeders could have predicted was his attitude. Red would never let anyone ride him. If they do he would throw them off at the first jump, or his specialty: roll on top of the rider. When bored, he frees the other horses in the barn, and let them run amuck. Because of that he has to wear a muzzle at all times, except during feeding. Mr. deRothschild saw potential in Red, which when his previous owner wanted him killed on the spot, Mr. deRothschild bought Red for his daughter, who was attending his heavy funded theory program called Good Fences. His daughter, Beatrice, was horrid to anything and anyone around her. Nicknamed “The Bear” none of the other girls at Good Fence liked her or Red for that matter. Until Merritt showed up, being roommates with Beatrice, and given Red as her horse to take care off. ““So do you want to be friends now?” She asked quietly. And that was the thing. This has never happened to me before. I did want to be friends with this girl. I really did.” Soon Red and Merritt became a dynamic duo, as Merritt was the only one allowed to ride Red. Taking an interest, Mr. deRothschild shipped the two of them off to Florida, to get properly trained, as they were going to show as real riders. The only thing Merritt could not predict was the attachment of Red, who saw her as his and only his, and what he would do to keep it that way.

Cecily von Ziegesar is known for her one and true series: Gossip Girl. Thirteen books of the trials of Blair and Serena, it seemed as if Cecily could not write about anything else. But this book proves you all wrong. Cecily von Ziegesar took a normal story of a girl and her horse and twisted it into a dark horror story, but not really. See Merritt was a typical trouble girl: she had her issues and instead of facing them, she ran away and douse them in a bottle of alcohol. Her horrible friend (Beatrice) was no help to her cause, and the hansom boy gave her the on and off feelings (Carvin). You even got the Gossip Girl favorite line as in this book it states “You know Ann loves you. Xxoo” which is pretty close to the “You know you love me. Xoxo, Gossip Girl” line. Like really Cecily? You had to add that in there. The only reason why this story stand out is Red: beautiful but trouble Red. See the story had two points of views: Merritt and Red. How many books take you in the perspective of a horse, the answer not many. Red had some dark thought as his need for Merritt went from love, to obsession, as he hated anyone that took her away from him. His obsession with her was the driving point of the story as it was the sole factor that kept you reading, as Merritt herself was kind of dry, where Red made you want to keep reading. Love is the only thing keeping these two together, as Red will do anything to keep Merritt by his side, but Merritt has different plans, ones that do not include Red, something Red cannot face. 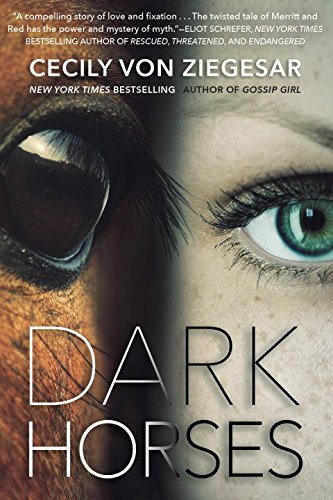 When loves turns to obsession, and add in some murder.