One Man Guy by Michael Barakiva

Favorite Quote:
"In order to be irreplaceable one must always be different."- Coco Chanel

One Man Guy by Michael Barakiva is a fresh, truthful, inside look at what it’s like to be a boy figuring out his sexuality in his teens. From an author who went through similar struggles during his teenage years, One Man Guy is refreshingly eye opening. The story revolves around an Armenian boy, Alek, who has a family one tent away from a full blown circus and is spending a summer imprisoned in summer school. His parents keep a strict hold on his life, using their religion and past struggles to keep him in line. When Alek’s grades start slipping, his parents force him into summer school where he meets a boy that opens his eyes to the possibility that he might be gay.

At a time when gay rights and turmoil over equality is very present in everyday life, this book is debuting at a prime time. Alek’s story is very real and very personal. The author writes it in such a way that the story opens your eyes to the not so simple task of coming to terms with yourself and getting others to do the same. One Man Guy is very empowering and despite some cheesy 90s teenage dialogue, the book presents itself positively through moments of laughter at family shenanigans and frustration at relationship struggles. Regardless of opinion on gay rights, everyone who reads this story will end up rooting for Alek and Ethan and go through their ups and downs right by their side. This generation needs a fresh and real voice and Michael Barakiva does so perfectly. 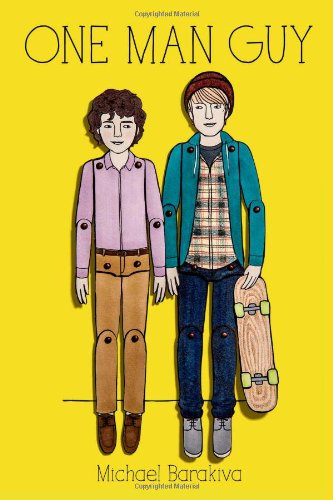