Ruth Baron’s debut novel Defriended is a fresh and innovative mystery novel for teens; however, it’s not one to leave readers wanting more.

Jason Moreland is your typical American Teenager. And it’s his love for the social network site Facebook that gets him trapped in the middle of a love affair like no other. After months of chatting with her online, Jason realizes he’s in love with Lacey. This is a problem, and not just because they’ve never actually met, but because Lacey is dead. After many attempts to get Lacey to meet him in person, Jason decides to do the only rational thing: google her. What he finds however, will take his average teenage life, and turn it into a life that is anything but normal.

Jason’s cyberstalking results in news reports, first documenting Lacey’s disappearance after a party and then the discovery of her dead body a few days later. Confused but curious, Jason decides to confront Lacey in hopes that she’s real and what he read was simply a misunderstanding. But waiting for her reply leads Jason to question the inevitable. Is Lacey alive and in hiding? Or was this a cruel trick devised by his friends? Or could he have done the impossible and found a way to message those in the afterlife?

Whatever the reason behind the mystery may be, those looking for a quick and easy read will enjoy Baron’s novel. However, those looking for an edge of your seat thriller should shy away. Defriended is a novel meant for a light beach read, not one to keep readers thinking. The pop-culture references of bands and supposed teenage-obsessions are often stereotypical. Some may find the references irritating, but most will ignore them as they want to read on, desperate to find the truth behind Lacey’s façade. 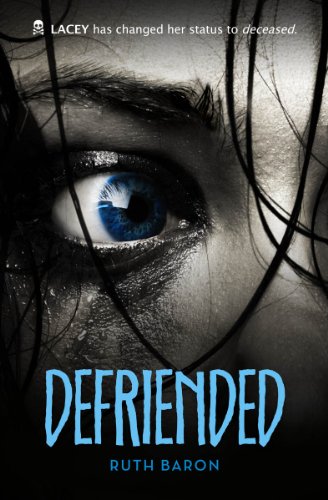