The Reptile Room (A Series of Unfortunate Events, #2) by Lemony Snicket | Teen Ink

The Reptile Room (A Series of Unfortunate Events, #2) by Lemony Snicket

Life has a strange way to showing us love. It might make you late for work, so that you are not a part of the five car pileup you hear on the news. You might get a phone call ruining the moment you were going to propose, to a person who was going to leave you a week later. But what about death? How can life explain to you that they took your loved one away for a good reason? The Baudelaire children's: Violet, Klaus, and Sunny, parents died in a fire that destroyed their home. Moving in with a distant relative, Count Olaf, he was awful to them, and went so far as try to marry Violet (who is fourteen) in order to get his hand on their fountain. Thankfully these clever siblings outwitted Olaf, and move on to their next relative, looking for a happy ending.

Driving down the Lousy Lane that reeked of horseradish to their late father’s cousin’s, wife’s brother: Dr. Montgomery Montgomery (yes his first name is the same as his last he is very sensitive about that). Greeted at the door, Dr. Montgomery instantly swept the orphans into his arms, telling them to call him Uncle Monty, as he led them into the kitchen for coconut cake. He was a herpetologist, which means he studied snakes and other reptiles. Keeping the poison ones locked up, he introduced the children to their place of work in The Reptile Room (thus the name of the book). Violet was to invent snake traps, Sunny to cut rope into certain length, and Klaus to read up about Peru, as that is where Uncle Monty was taking them in a week. The orphans found a bit of happiness, going to the movies in the evening, having lunch with a kind and thoughtful uncle, and doing the work they actually enjoyed. Stephano, Monty’s new assistant was to arrive in five days, with the five of them setting off for Peru two days later, it seems as if past horrors are finally behind the children. Sadly, their tale is called A Series of Unfortunate Events, thus an unfortunate one might arrive, with a beard, no eyebrows, and a strange eye tattooed on the ankle.

Once again Lemony Snicket entails us with another depressing novel about three children who all drew the short straws of life. Plot is similar to the last, which is not very exciting, or a great indication of a series, but there is hope. With Snicket writing like an outside source (a detective following these three children) emotion is something he is lacking. Violet, Klaus and Sunny could be three children who just met for the amount of love they show each other. Less than two years Violet was considered an only child, before Klaus came along. With her sister being a baby, Violet should take on the role as a mother, and not the mildly award something is not right, aunt. True character development needs to be added to this series to make someone believe they are not only siblings, but also like each other as individuals. With eleven books more to go, the Baudelaire children tale is far from done, and we got Detective Snicket to tell us all about it. 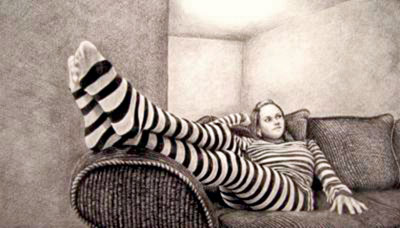