What are stories? O’Brien, writer-veteran of the Vietnam War, attempts to describe what a story must be, and what it must not, in tales from his post-war collection, The Things They Carried. With an eye for the bittersweet and an ear for the soul-searching, O’Brien writes about one platoon of men, and what they carried.

His stories range from the hilariously picaresque to the deeply, cruelly beautiful, and arrange themselves as intricately as the jungle of Vietnam. If you’ve never read about the Vietnam War before, the political haze surrounding it takes a backseat. The book is made of war stories, human stories, that will make you snort, laugh, and cry at the same time. They capture photographically the disconnected nature of the war, and a land so sensual and vague it has a personally destructive effect on its soldiers.

Technically, of course, the book is about the Vietnam War, and the time of several American soldiers there. Some archetypes surface, like the lovestruck leader Jimmy Cross, the wandering Norman Bowker, and fierce, Native-American descent Kiowa. O’Brien himself slips in and out of the pages, until we begin to wonder if he is real or not. Slowly, though, we begin to understand O’Brien’s so-called “happening-truth” and “story-truth,” which appear as two sides of the same coin.

Each story is meaningful; it builds on the greater human story. The scene can change from quietly observant to roaring hoarse in a matter of minutes, from velvety to gritty. Even then, O’Brien's writing retains an honest elegance. We find all the faces of humanity in its pages: the insensitive and the ridiculous, man in the face of death, strange and incredible aliveness, and the unfeeling earth that facilitates the cycle. The novel possesses an innate admiration for life, and above all, the power of storytelling.

I read the novel for my English class, and am terribly grateful I did. I’m now anxious to get my hands on O’Brien’s acclaimed Going After Cacciato, a novel that takes place within the time frame of the war. One of the teachers at my school served in the army and came to our class to speak on his time in Afghanistan. Admittedly, our class was timid at first. We felt inadequate, poking at something we couldn’t hope to understand. He agreed O’Brien’s book could not be more real, more basically true. It’s the stories; it’s the lives; it’s the things they carried. 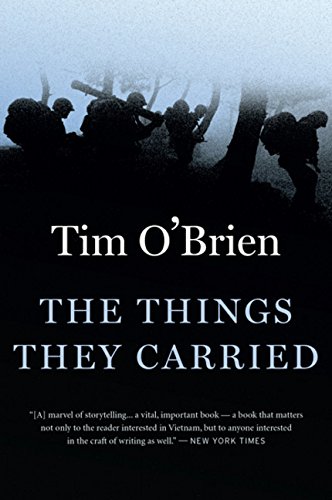