Prince Caspian (The Chronicles of Narnia #4) by C.S. Lewis

Narnia a place where the talking beast and the sons of Adams lived in harmony. Yet it has been thousands of years since Peter, Lucy, Edmund and Susan ruled the lands of Narnia. In that time, humans have taken over the land, forcing the dwarfs and talking beast into hiding, bring their own none talking beast into the land. The people came from the land of Telmar, called Telmarines, but came from our world to Telmar, making them not a part of Narnia at all. The current King is a mean old man called Miraz, who after killing his brother took over the throne. Miraz trained his nephew, who parents are dead, to be next in line for the throne. Yet mad that his nephew rather read and believe in fairy tales, then learn how to ride and fight. His fairy tales were about Old Narnia, where talking beast ruled the land, with High King Peter and his siblings, and the great lion known as Aslan. Miraz punished the nanny who was telling Caspian all these lies, and gave him a tutor to study with for now on. But his tutor, too believed in old Narnia as he gave him Queen Susan’s horn and told him to run. Because by that point Miraz wife gave birth to a son, meaning Miraz had no use for Caspian anymore. In great need Caspian blew the horn as he waits for help, what type of help he does not know, but with his belief in Aslan knew that great help was on the way.

Peter, Susan, Edmund and Lucy waited at the train station for school. The girls would go to their school, and an hour later another train will come to take the boys to their school. This was the last time the siblings were going to be together for a very long time. They were in mists of saying their goodbyes when a sudden pull from the beyond pulled them back to the lands of Narnia. Discovering quickly where they are at, the four set off to become accustom to their land. They discover quickly how much Narnia time past in their absents (which was only one year in their time) as they seal their beloved Cair Paravel in ruins. With the help of the dwarf Trumpkin, or DLF (Dear Little Friend) Peter chose the only way to save their land is to battle King Miraz himself, in a duel.

This book was better than the third part (The Horse and His Boy) that C. S. Lewis wrote. The four siblings are back, doing to same stuff they always do. Lucy is the believer, Edmund is sulky but nicer to Lucy than last time, Susan is acting like the mother of her siblings, and Peter is trying to be the High King again. The story line made more sense than the others, as it is one year from their previous story (The Lion, the Witch, and the Wardrobe) but thousands of year in Narnia time. The issue I had most was the four of them kept remember times from their rule in Narnia, places where they had battles and stuff. Yet you never got to read about those battles, so you, as the reader, had no idea what the children were going on about. With only fifteen chapters, and 223 pages, the story was dull for the most parts but at least it made sense. 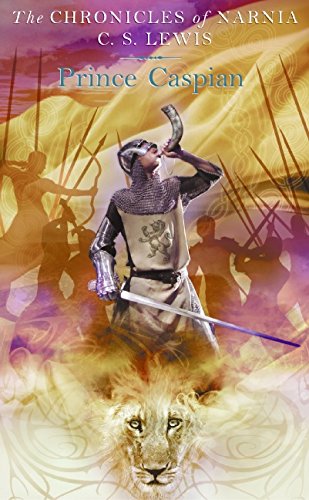 The four siblings are back for a grand adventure!