Flowers for Algernon by Daniel Keyes

I’ve honestly never read a book like Flowers for Algernon. Maybe there are others like it, but I haven’t encountered them, so I don’t know where this would rank among them. In all the books that I’ve read, though, this has to be one of the most meaningful, striking, and thought-eliciting. Let’s start with Charlie. This is going to contain some spoilers. I’ll try not to ruin the book for anyone.
Charlie Gordon has been mentally retarded from childhood. He works at a bakery with all of his good friends. He goes to a school for retarded adults and he tries as hard as he can to learn how to read. He is aware that there is a bit of a difference between him and his colleagues, and he thinks that learning how to read will fix this. He signs up for a program to help him become more intelligent.
Enter the plot and the beginning of the story. Everything is told in Charlie’s journal. He starts doing some tests and racing a maze with Algernon, a mouse that has already been through the experiment for which he has signed up. At first, Algernon beats him every time. Then, things start to change.
His initial increase in IQ is gradual before speeding up almost exponentially. He goes from one end of the spectrum to the other. All should be well, but this book represents life, so it’s not.
Although his intelligence increased so dramatically, the experiment never matured him emotionally, and his previous state didn’t allow him to. Charlie’s emotional levels are leagues behind his IQ. He wants to get everything caught up in a short amount of time so he can experience everything he was missing.
With an increased intelligence comes the realization that his “friends” at the bakery weren’t laughing with him; they were laughing at him. Even the scientist at the lab show similar scorn. They speak as if his life didn’t start till the procedure, like they gave him meaning and purpose.
As his intelligence peaks, he comes to a devastating realization. In the midst of all his struggles with mismatching intelligence and emotional levels, women, and this new realization, his old self appears to him at various time, refusing to let go of him.
The actual style of writing isn’t apparently genius, but it truly is when you think about it. The author, Daniel Keyes, is brilliant in that he keeps his character real while still showing the varying intelligence levels. Before the procedure, the writing is rough, lacking in punctuation, spelling, and grammar. After, the coherence slowly increases. Despite the unbelievable operation, you find yourself thinking that Charlie Gordon is a real person, and not in the way that you do with other books.
In short, I wouldn’t recommend this book to those who dislike sad endings, are looking for something light to read, and/or don’t want their thoughts to be provoked, even long after reading the book. For everyone else, this is definitely something I would recommend, even if it doesn’t sound like your style. It didn’t sound like mine, and yet it is one of my favorites. 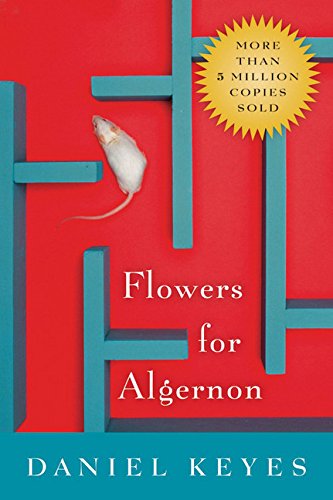 As usual, I'm reviewing a book that caught my attention. This one was very good and meaningful, so it is a positive review.

And I'm Judy!!-Judy from the Finger legs

View profile
I found Flowers for Algernon to be thought-provoking, as well! I enjoyed reading your review! :D The idea that "the grass is greener on the other side" seems to be explored in the novel. Charlie's intelligence came at a price. How often do we wish for something without really knowing the consequences of getting what we want?