The book Nickel and Dimed by Barbara Ehrenreich was an eye opening novel about 'how (not) to get by in America.' It shows her ups and downs of how she survived working as a minimum wage worker serving meals, cleaning homes and taking care of the elderly.
The novel was divided into three parts based on where she chose to venture. First she was able to find a waitressing job in Key West, Florida, where she barely got by living in a trailor. Then she ventured off to Portland Maine where she found a job with The Maids, a local housecleaning service AND working at a nursing home. Last, Ehnereich traveled to Minnesota where she worked at a Wal- Mart putting clothes back on the racks. In each of her three experiences, she has to be able to live as cheaply as possible based on the earnings she has made, which were not much at all. At her third job (Wal- Mart), she wasn't even able to afford any place to live, and a local organization suggested she live in a shelter until she could afford one month's rent on an apartment.
This intriguing non-fiction book takes an undercover look at the lives of under paid workers. What Barbara Ehnereich did was extremely enlightening in the fact that she proved to millions or readers that living on minimum wage is nearly impossible. I am convinced she is now able to show others that people do not work certain jobs because they want to, especially because most minimum wage workers cant even afford a place to live.
There was one aspect of the book that I was unsatisfied with and that was it being unethical. Ehrenriech writes a story about each place that she visits and uses the actual people that she met. Even though she changed the names, I am sure others might figure out who the person was. I think she should have told the workers that she was undercover and asked them permission to write about them. She got to know so many different workers, and then just left, and many of them didn't even know why. I did however like how Ehreniech checked up on Gail at the end of the book and let her know what she had been doing while she was serving in Florida. 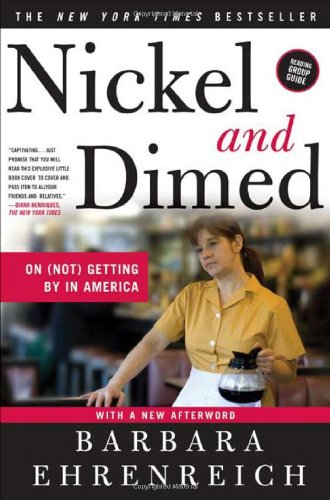