The Valley of Thorns | Teen Ink

The Valley of Thorns

The Valley of Thorns
By: Patrick Carman


Before The Valley of Thorns, by Patrick Carman, you couldn't get me to read a story about a girl and her rabbit friend, now you have to rip the book away. If you're looking for an adventure, then you've found it! Patrick Carman cleverly leads into a book that will leave you at the edge of your seat. Though you may think that the beginning is boring, just wait until you get towards the middle. If you like the first book, then you should check out the rest of The Land of Elyon series.
For Alexa Daley, age twelve, summer is going great. But anything great in Elyon doesn't last too long. This stands true when shortly after arriving in Bridewell with her father, Alexa's good friend, Warvold, dies right before her eyes. But not before telling her a story of seven blind men and an elephant. What she didn't know was that this story would help her a lot in this story. But that's not all that was in store for Alexa in The Valley of Thorns, book one in The Land of Elyon.

After the funeral, Nicholas, Warvold's only son decides to stay in Bridewell. One night, he tells everyone of how his mother used to carve Jocastas into jewels. These were like an image within an image. So if you had a really strong spyglass, you would be able to see through the top image into the one within. Then Alexa, curious as ever, decides to check out the Jocastas on the library cats, Sam and Pepper. She was able to draw the image in Sam's but when she attempted to look at Pepper's he lashed out and put a hideous mark on her hand. Sam's Jocasta helped her find the door to the outside world…

Shortly upon entering this “new world” outside the walls, Alexa made a new friend named Yipes. Yipes was informed not to tell her anything, but to just bring her to Darius. Before that, she needed to retrieve a stone to be able to talk to these animals. Soon after meeting Yipes they were on a grueling uphill journey to meet with Darius. In the morning, Darius came to fetch Alexa. Alexa was terrified to be traveling with a wolf, but she had to go with Darius to meet with Andre, another animal of the Fenwick Forest. Darius shows her to Andre. The scary thing is that Andre is a bear. But after eating, Alexa relaxes a little. Andre then tells her that there is an evil lurking in the Dark Hills and that there is someone inside the walls that is a part of this evil. He said that this person is called Sebastian, but the animals' referrer to him as the “serpent.” After that, Andre tells Yipes to read Alexa's Jocasta on the stone. What is read is something no one expected. Alexa's heart thumped as Yipes declared, “You will be the one to find the serpent.” Now Alexa, with the help of her newly found friends, will find Sebastian and stop him from bringing down Elyon. When Alexa finally does find out who Sebastian is, everyone is surprised. Who could Sebastian be? You'll just have to read The Valley of Thorns. 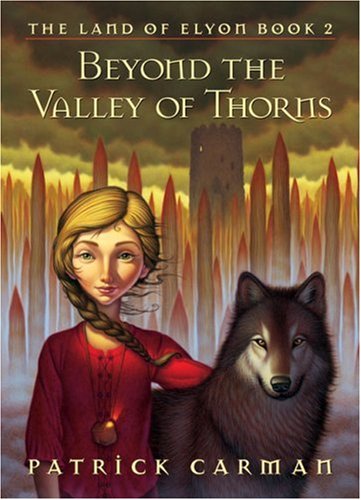