Eon by Alison Goodman (originally titled The Two Pearls of Wisdom) is the first in a high fantasy duology centered around dragons—but not just the common rendition of the mythical creature. Instead, these are dragons made of energy in a world that borrows from Chinese and Japanese history and mythology. The dragons and their energy can be controlled by skilled humans known as Dragoneyes. As women are thought to not be able to control or handle the power of the dragons, sixteen-year-old Eona is masqueraded by her master to be the twelve-year-old Eon, who then becomes the Dragoneye of the mysterious Mirror Dragon, a creature that has not been seen for hundreds of years. If she is discovered, the penalty is death. Worse, the Mirror Dragon does not seem to be controlled as the other dragons are.


As the first book, Eon is mostly an introduction to the world and characters with a plot that largely consists of Eona discovering how to use her powers and how that relates to her identity. The relationship between Eona and the Mirror Dragon as well as the key to her power was fairly obvious to me, but the story offered much more than the mechanics of the plot.


First of all, the writing is lovely and immersive and does a great job in evoking the feel of the fantasy world. Goodman, a creative writing teacher, is by no means an amateur. That said, I never quite got a clear picture of how the Dragoneyes were able to control the dragons and the elements, but as I have a tendency to tune out during action sequences, this may not be a fault of the prose itself.


Nevertheless, there was more to explore, including the relationship between Eona, her master, and her servants—with some twists along the way. And underneath the plotting, Eon is really about identity and gender dynamics. Eona grapples with hiding her true self in order to be powerful and stay alive, but that makes her constantly on edge and ends up hindering her potential abilities. Meanwhile, other elements and characters challenge the typical division of masculine and feminine.


With a unique and mesmerizing fantasy world and social commentary, Eon is a solid beginning to this interesting duology, and I’m looking forward to continuing the story with the sequel, Eona! 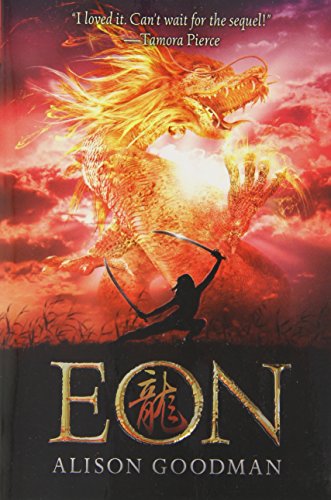 View profile
This is a wonderful and phenomenal book review of 'Eon.' Congrats on the Editor's check for you truly deserve it. :) Fantasy has always been one of my favorite genres of reading, so when I first read the back of 'Eon,' I immediately was excited; and after I read it, I fell in love with it and liked it so much. I could connect to Eona, a lot, and the saying, the proverbs that she said in the first book were one of my favorites about the book. Haha. I look forward to reading the sequel to 'Eon,' as well.:) Your writing is absolutely beautiful and captivating and talented. You have so much beauty and talent and greatness and so much more; and you're a wonderful and beautiful and talented writer and person. All of this and so much more. I believe this. Thank you so much for sharing this, your writing. :)