With Cinder in jail it seems all hope is lost for the Eastern Commonwealth. Yet the doctor told Cinder that she needed to escape and met him in Africa and discuss her being Princess Selene. With Price Kia confused and hurt from her lying to her, an unloving family, and a dead sister, Cinder has nothing left to live for.  Even if she was able to break out she would become the Commonwealth's most wanted fugitive.

Half way around the world was Scarlet Benoit a sixteen year old girl with flaming red hair who lives with her grandmother in a small town in France. Until three weeks ago everything was going well; their farm was striving, they had no secrets, and Scarlet hasn’t heard from her drunk farther in year.  When Scarlet got home one day she discovered the house a mess and her grandmother missing. Calling the police Scarlet waited for weeks, with no sign of her grandmother, and the police were losing hope. Then Scarlet farther appears, claiming his grandmother was hiding something, and that these “men” left him in the field by their house in order to find it. Scarlet grasped this idea of hope that her grandmother was still alive.

Cinder on the other side of the world is planning her great jail break. Except she ended up in an occupied cell contain Captain Thorne, who would not let her leave without him. Together the escaped the jail and with Thorne’s ship escape the nation. This puts Kia in an awkward position as he has to hunt Cinder down, while secretly hoping she gets away. The Queen is also breathing down his neck forcing him to either hand over Cinder or face a war with her army.

Marissa Meyer did it again with this classic fairy tale gone into a dystopia world. Scarlet taking on the tale of Little Red Riding Hood , with the grandmother, red hood, but a more sexier yet likeable Wolf. She even added Cinder back in there tying the books together.  We learn a bit more about how Cinder is Princess Selene, and how come she doesn’t remember the first part of her life. I love Scarlet’s and Wolf relationship as it is teetering on the edge of wrong but so right. The writing was good making this long book fly through your hands. Even Thorne was a good character adding comedic relief in the toughest of situations. A great book and an awesome second cannot wait for the third book in the spectacular series. 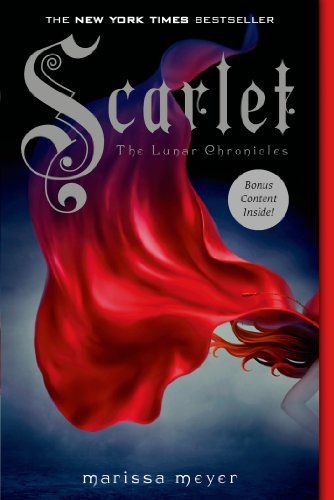 A beautiful twist on a classic tale!