City of Heavenly Fire (The Mortal Instruments #6) by Cassandra Clare

Clary has two names; Clarissa "Clary" Fray, and Clarissa “Clary” Morgenstern. Clary Fray is a human, best friend with Simon Lewis she spends her day drinking coffee, drawing, and going to Simon’s band rehearsals. With her overprotective mother, Jocelyn Fray, her father died before Clary was born. This is the Clary she was for the first fifteen years of her life. After meeting Jace and the Lightwood’s Clary Morgenstern was born.  Clary Morgenstern erases the Clary Fray from her life in a swift clean cut way. She traded her art books, for the gray books, pencils for daggers, her mortal life to the one of a Shadowhunter. Clary dragged her mother back into the world she tried so hard to leave. In this final installment Clary is faced with her biggest issues, and has to sacrifice everything to save the world.

Clary and Jace have been though a lot together. Clary fell in love in book one, even though he didn’t show it as much, Jace did too. When they found out they were siblings it literally tore them apart. Jace couldn’t stand being in the same room as Clary; where Clary was dying to talk to him, saying that together they can get through this. When they found out Jace’s real father was Stephen and nt Valentine Morgenstern, he couldn’t find a better way to celebrate than giving Clary a big old kiss. Then came the issue of Valentine’s real son Jonathan “Sebastian” Morgenstern.  Sebastian had a special interest in his stepbrother as he found it odd that Jace never knew anything about him, when he knew about his father’s other son.  After Sebastian's resurrection, he took Jace and had a mind control over him, forcing him to do his bidding. Clary was the one who went after Jace and Sebastian and forced Jace to break her brother’s control. Together they have been through hell and back, yet they never gave up on each other. In this book Clary has finally broken through to Jace to stop putting up walls and he honest with his emotions. Now together as a team Jace and Clary are almost an unstoppable force.  Together they will save the world, and their family along with it.

Isabelle never trusted boys. She told Simon once that her watched her brothers give their hearts away, where to her mother’s warning kept her locked up.  After all, her farther cheated on her mother, with the only reason why he came back was for Max. Simon was different, and Izzy couldn’t figure out why. He was Clary’s mortal friend when she met him, and like every guy he was drooling after her. When he became a vampire she knew dating a Downworlder would be bad, but Isabelle embraced the rebel in her. When Max died it was Simon who she allowed to comfort her, that was the turning point in their relationship. When Isabelle found out Simon was also seeing Mais Roberts, the truth behinds her mother words came out. This made Isabelle cut off all ties to Simon, casting him out of her life. Simon being friends with Clary came to Isabelle to DTR (Defined The Relationship), she had to admit (but not out loud) that she beautiful Isabelle was in love with geeky Simon Lewis. In this they are closer than ever, there is nothing Isabelle would not do in order to save Simon and the same went to him. Yet Isabelle, who grew up in the shadowhunters would know that all heroes die young.  She has to accept that geeky Simon is a hero now, and that he will do everything to save her, even if that means that he’ll never see her again.

Alec Lightwood is the eldest of the Lightwood children.  He was the family’s leader when his parents were away, the one Max, Isabelle and Jace looked up to. He even became parabatai with Jace, as Jace knew he could trust Alec. The only thing that made Alec less than an ideal shadowhunter was the fact that he was gay.  With Alec being the only living son after Max’s death, his parents did not take it well (especially his father) that their only son in fact will not be marrying a girl and producing children.  Even as a gay shadowhunter Alec found love and heartbreak. His first was his crush on Jace, as he felt he would be the one Jace would open up too. He was right in a way as Jace did love him, but not in the way he wanted. Alec thankfully got that fact and move on with his life.  The one who Alec gave his heart too was not respected by his world, but was the warlock Magnus Bane. Alec broke the news to his parents by kissing Magus in front of the whole Clave after the battle against Valentine. Issues for them started to arise as Alec kept pressing Magus about his past, one that he wasn't willing to share.  Alec also made the huge mistake of trusting one of Magus’s exes’s and went to her looking for the cure to shorten Magus’s immortality.  It seems that was the end of their relationship, but not quite as we know Alec is still in love with Magus, but will Magus be able to forgive him, that is what this book is all about.

Cassandra Clare had kept us on a roller-coaster with these relationships. Now as this is the final book it’s time to throw it into overdrive to cause one last stir of drama before leaving them off at (hopefully) a happy place.  This book is the best out of the whole series, as the writing is not bad, and as it is the longest book (725 pages) there were no boring parts. Each relationship is heightening as their lives are threatened. The final war between the shadowhunters and the dark shadowhunters looms ahead, yet the bigger battle between siblings is what is in store. Sebastian believes Clary (and Jace) belongs to him, which is why he does everything in his power to get her to join him. Clary, who states very clear that she doesn't belong to anyone, has to plot against her own brother to save the world. In this final installment Cassandra Clare makes you wish there was more books (I know shocking) as this one has a truly amazing ending.

“Heroes aren't always the ones who win. They're the ones who lose, sometimes. But they keep fighting, they keep coming back. They don't give up. That's what makes them heroes.” – Clarissa Adele Fairchild-Morgenstern 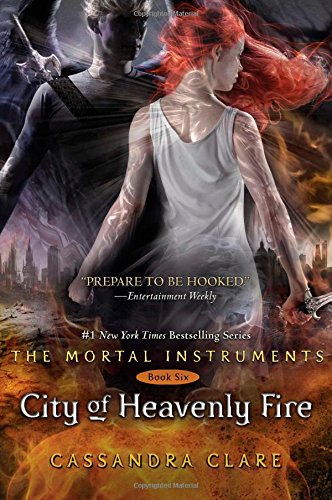