A Thousand Pieces of You (Firebird #1) by Claudia Gray

Physics is the study of the universe from the largest galaxies to the smallest subatomic particles. And not just in our own world, but others surrounding us, trying to break the fabric of time. Marguerite’s parents are known for their radical scientific achievements of discovering parallel worlds to our own. Thing just a fraction of reality away there is another you whom lives a totally different life, or the same life with small details change. In this world you wore pink and got onto a bus. In the next world you wore green and got onto a bus. In the third you could have worn pink and got killed instantly by a bus. Millions of world lined parallel to our own. Marguerite’s parents invented the Firebird, which allows whomever to wear it to travel to the parallel worlds that their other body inhabitants. Once there they can remind themselves of who they are and explore the unfamiliar world. This was the biggest discovery in physics yet, too bad the Firebird is still a prototype. The Firebird was built to bring peace between the worlds, yet it can also be used to start wars, spying, on each other. The fate of the Firebird rest on Marguerite’s hands, as she is preparing to travel through worlds.

Marguerite is used to having assistants in her house. As her mother struggles to have children (giving birth to Marguerite and her sister was a miracle itself) they pretty much adopted their assistants as their own.  Currently in their house are Theo and Paul. Both brilliant students who are fresh out of university they work with Mr. and Mrs. Caine on the Firebird prototype. Theo who is cocky and jokes a lot can always make Marguerite laugh. The past few months he has been going “out” a lot, calling her Meg, and seems to be on a type of drug. Paul (who Theo calls little brother) is more quiet and unsure of himself in the Caine household. Paul was loved by all as at age 17 he already had his PhD, easily the smarts of them all (except Marguerite’s mother). He helps build the Firebird and made time to comment on Marguerites paintings. It comes to quite a shock when Marguerite’s father was murdered as his car break’s got tamper, causing the car to fall into a river. The only member that was not there was Paul. The family found out that Paul destroyed all the information of the Firebird, and the one prototype and disappear into another world. This made him the number one suspect in the murder case. Marguerite determined not to let Paul get away with it, set off with Theo to track Paul down throughout the worlds.

Claudia Gray starts off this series with a bang. Starting off with a love triangle, add half a cup of family drama, sprinkle in the society of “the man” as the evil millionaire power guy and you the beautiful A Thousand Pieces of You cake! Overall the book was not bad as the plot was really cool. You got to see Marguerite in five time lines: her own, gross London, old Russia, almost like hers but not and finally the at sea one. The one part I did not like about the book on how vague it was on the whole Firebird topic. This is not a physics book, but it should have some physics in it. All we know about the parallel worlds are that they are there, and you need the Firebird to get to it. I guess why this is considered a fantasy books as there is no science to back up the author’s characters theories. This book set to be a trilogy; I am interested in where it will be going as this first book seems more like a novel than a starter of a series. A nice read, with a catchy theme, one all teenage girls dying to get out of this world would love to read. 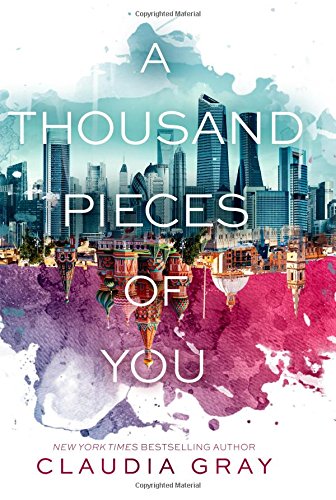