City of Lost Souls (The Mortal Instruments, #5) by Cassandra Clare

Clary Fray is a shadowhunter. In her world demons, werewolves and vampires are in her ordinary life. Even though her best friend is a vampire, her soon to be stepfather is a werewolf, even her boyfriend is a part human part angle shadowhunter, yet Clary could never be happier. Finally she has her life on track, and was ready to see what it brought her. Unfortunately her life brought back her dead brother Jonathan (Sebastian), a powerful demon, and almost killed her best friend. Clary manages to survive the worst night of her life, but not without a cost.

It has been two weeks since the night on the rooftop. Two weeks since Jace told her that he would be right back.  Jace has disappeared from the rooftop along with her brother Sebastian. In those two weeks Clary has been interrogated by the brothers to see if she had any idea of what happen that nigh on the roof, and if she was a part of it. The search for Jace and Sebastian has been the Clave top priority. But after two weeks other events have taken place, stopping their search for Sebastian and Jace. Not giving up Clary, Simon and the Lightwoods continue searching for Jace. Their fear is that there is no way to harm one boy without destroying the other, as they are bonded together. If the Clave found out about this they will use Jace to kill Sebastian, not caring that Jace will die. While Simon and the Lightwoods figure out how to kill Sebastian and not Jace, Clary takes up her own suicidal plan in order to save her boyfriend. After all Clary was the one who ask the angle to return her love to her, this is what brought her brother back as well. Can Clary fix her mistake, or end up killing the person she loves the most in order to set the world in balance again?

Cassandra Clare is almost done with this series. I am happy to say where near book three and four the series was going downhill quickly, this book has brought up the series average. In this Clary is madly in love so we get to see all the silly and suicidal plans she will come up with in order to save her love; Jace. In this Jace is not possessed but not himself and he and Sebastian has an amazing  guy romance going on, which was hilarious to read as we know the real Jace is killing himself over it. What I am truly sad about this is Alec and Magnus relationship. Alec cannot help but listen to the old vampire girlfriend, as he is constantly scared of himself growing old were Magnus stays the same. Their relationship gets rocky as their secrets keep on growing.  This book is full of love and heartache, as the battle of darkness is coming. Soon the battle will reach war; but which breed of shadowhunters will survive? 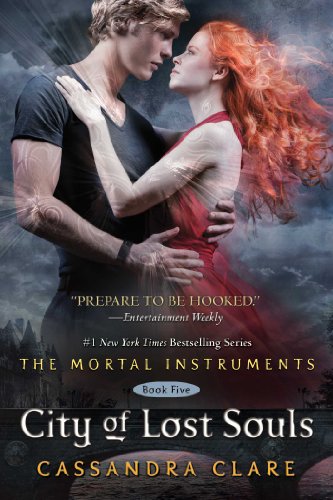