A Thousand Pieces of Gold by Ruthanne Lum McCunn

A Thousand Pieces of Gold by Ruthanne Lum McCunn is the story of a girl named Lalu living in eighteenth-century China. Lalu's family is poor, but they manage to survive and pay their taxes. After four years of saving and frugal living, Lalu's family saves a bit of money. Her father, feeling lucky and discontent with his hard life, decides to lease all the land he can and plant winter wheat, a fickle crop that can either prosper and make one rich, or not grow at all. Only rich land owners dare to plant winter wheat, but Lalu's father rashly decides to risk everything out of frustration. Later, the winter wheat crop fails, and Lalu's family is left completely destitute. The only option for their survival seems to be to sell Lalu, but, desperate to avoid this terrible fate, Lalu begs her father to allow her to help him in the fields. For some time, it seems that Lalu's family will manage without Lalu being sold; however, this changes when a band of bandits raids Lalu's village. The leader of the bandits breaks into Lalu's house, and Lalu's father offers him a meager sack of potatoes in the hope that this will appease him. Unsatisfied, the leader demands that Lalu's father sell him Lalu for two bags of seed, and Lalu's father agrees. Terrified and devastated, Lalu leaves with the bandits, who decide to sell her to a brothel for a hefty sum. Lalu steals some of the bandits' jewelry, and, after she is sold once more, offers it to the brothel's owner, Li Ma, for her freedom. Li Ma refuses the jewelry and instead sells Lalu to a slave trader bound for America. There, she is auctioned off to a saloonkeeper, Hong King, who rapes her repeatedly. Miserable and desolate, Polly, as Lalu is now called, can only find solace in her friend Charlie, who does his best to protect her from the horrors in her life. Later, Charlie plays a poker game with Hong King and Polly is offered as a prize if Charlie wins, which he does. Charlie then gives Polly her freedom.

The defining aspect of A Thousand Pieces of Gold is its main protagonist Polly, or, as she is initially called, Lalu. Polly is first introduced as a typical Chinese girl of the nineteenth

century; she defers to her parents, is completely dependent on the gods, and believes that her real duty is to marry and have children. Later, however, this subservient perspective on life changes, the catalyst of this transformation being the failure of her father's endeavor to profit off the planting of winter wheat. After the family is left destitute, she begs her father to allow her to work in the fields, for the only alternative is for her to be sold. She works hard in the fields, and manages to find the beauty in farming. This is the moment when Polly first begins to gain her independence, if only by a little, for she puts concentrated effort into learning a survival skill that requires some knowledge. It is a significant moment that defines the novel's tone, as it underscores a theme of feminism and the importance of learning.

Polly's independence further grows after she is kidnapped by bandits and sold to a brothel. One of the bandits tells her that they both" '...have no choice except to follow the paths Heaven has allotted [them],' " a statement in accordance with her upbringing. Unwilling to accept this as her fate, Polly steals some of the bandits' jewelry, prepared to sell it to buy her own freedom. This is one of the pivotal moments in the story, as it shows Polly actively defying one of the principles her parents have always instilled in her in favor of her own independence. Moments like these shape and define the book, and show that learning, perseverance, and independence are of utmost importance. Because of this, A Thousand Pieces of Gold refutes gender stereotypes through its protagonist Polly, making it unique and enjoyable. Moreover, through Polly's perseverance through horrifying ordeals, the reader learns that reality is bitter, but trying times can only be overcome by strength of mind and character, rather than luck and subservience. Overall, A Thousand Pieces of Gold is an excellent book, with a refreshing perspective on social convention and real life. 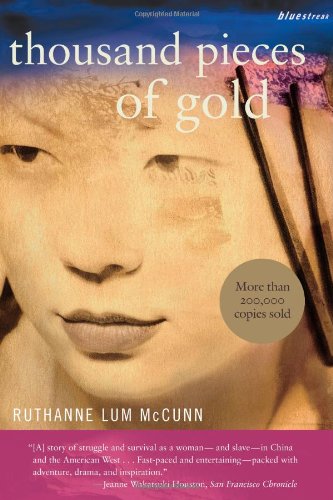